Leg bands are to waterfowlers what antlers are to deer hunters. 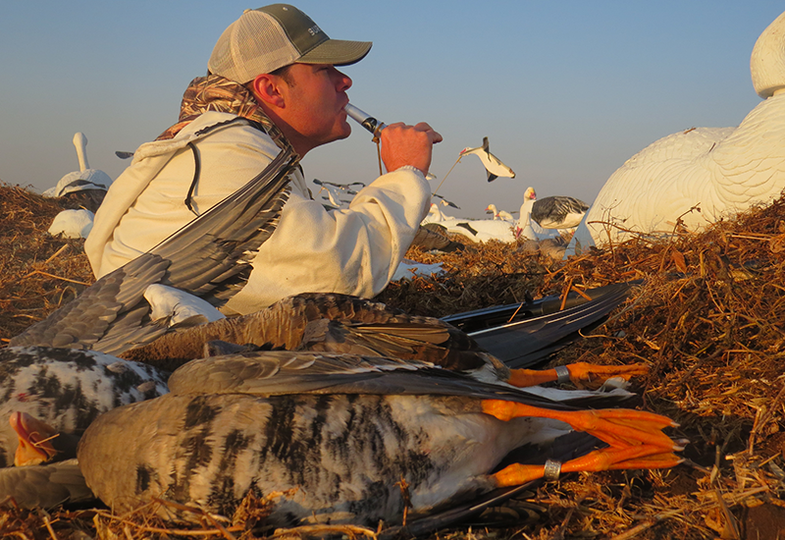 A duck hunter told me a story about how his mother in law died while he was out hunting. The story began: “My buddy shot a banded greenhead that day . . .” Bands are a big deal. Waterfowlers remember them.

The metal leg bands researchers attach to the legs of ducks and geese are to us what antlers are to deer hunters. Actually, bands are like what antlers used to be: a trophy you lucked into. Most of us don’t know a bird is banded before we shoot it, just as it used to be that shooting a trophy deer was something that happened to you, not something you set out to do.

Pure luck plus location has a lot to do with how many bands you collect. There are lots of hunters who have shot tons of birds and have very few bands, such as Sure Shot’s Charlie Holder, picture above. He has shot plenty of ducks and geese, but those two white fronted geese were his first two banded birds and shot both out of a group of three geese in Canada last month. Other people who happen to live in the right spot have lots of bands. Goose bands are pretty easy to come by where I live, and I’ve shot one in each of the past two seasons. But, I’ve killed a fair number of ducks in my life and have only one duck band. On the other hand, living in a state that has only recently allowed dove hunting, I have not shot huge numbers of doves. A few years ago I unknowingly hunted the field where our DNR had been banding mourning doves. I shot three banded doves all from the same sunflower field. Two of them I shot on the same day. Because I am not stupid I hunted the same field the next day and shot another one.

Bands provide researchers with important data about the birds we hunt and when you shoot a banded bird you get a certificate telling you where and when it was banded, which is very cool.It adds to the wonder I feel about the natural world to know that the snow goose I shot in Galveston Bay in 1997 was banded there as an adult in 1986. That goose had made the 2,100 mile journey from Hudson Bay to the Texas coast and back at least 11 times.

Unfortunately, bands bring out the bad side in people, too. A call lanyard full of bands lets you show the world what a great duck and goose hunter you are. Some people will claim banded birds they didn’t shoot, others will buy bands off e-bay. Callmaker Jeff Foiles made the news when he was convicted of, among other things, shooting banded geese in a park with an airgun for more bands to put on his lanynard.

An experienced hunter with a bunch of bands to his credit told me he once took former St. Louis Cardinal’s shortstop Dal Maxvill goose hunting in southern Illinois. There were three of them in the pit, and as I heard the story, two of them opened up on the flock and the goose fell before Maxvill started shooting. The bird was banded and my friend wound up with the band. After the hunt someone from the goose club approached him and said, “Mr. Maxvill would really like to have that band.” To which my friend says he replied: “Then Mr. Maxvill should have started shooting sooner.”