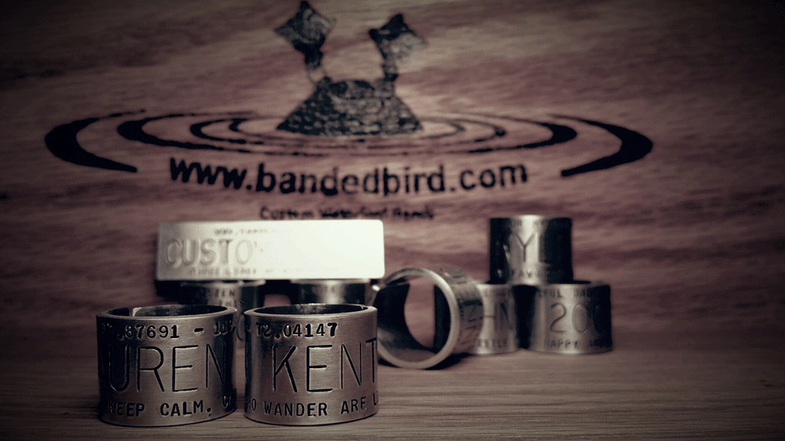 Here’s a last-minute Christmas gift idea for the waterfowler who has everything: a replica bird band.

Bands are trophies to waterfowlers, just as big antlers are trophies to deer hunters and big fish are trophies to anglers. And, just as there are replica antlers and replica fish, you can order replica bands, too. Joel Yeldell was inspired to start Banded Bird in part by a hunt when his group killed all eight Canadas in a flock, and seven were banded. HIs company makes custom waterfowl bands, either replicas of real bands, or bands with custom messages printed on them.

Yeldell says about 80 percent of the bands made by Banded Bird are custom, as opposed to replicas. “I do a lot of memorial bands for hunting partners that have passed,” he says.” We’ll do names, birth dates and death dates.” Banded Bird helps commemorate other life events, too. He has had customers order “Will you marry me?” bands and slip them onto birds in the field before giving it to their significant other. That only works if your boyfriend or girlfriend hunts, but then, it works spectacularly well.

Banded Bird also makes replicas. “People have old bands that may be worn or broken that belonged to their grandparents, or they may have bands that have been pounded flat, [which is how people used to display them]. I can make them new ones. Taxidermists order them, too, for birds so the customers can wear the band on their lanyard and have a band on the mount.”

When he makes replicas, Yeldell insists on receiving a copy of the FWS certificate so he knows he’s making a replica of someone’s band and also not screwing up a research project. That way, too, he discourages Phil Robertson and Tim Grounds wannabes from ordering up a bunch of phony bands to wear to impress. No certificate, no band. “We’ll make you a band,” says Yeldell, “but only if you get the original the hard way.”

At just $15 apiece, Banded Bird’s bands make a thoughtful and highly affordable gift for the waterfowler on your shopping list.