Building a Survival Fire, Part I

In my long career of shooting bullets into living creatures, I’ve only twice needed a fire. Both times the locale... 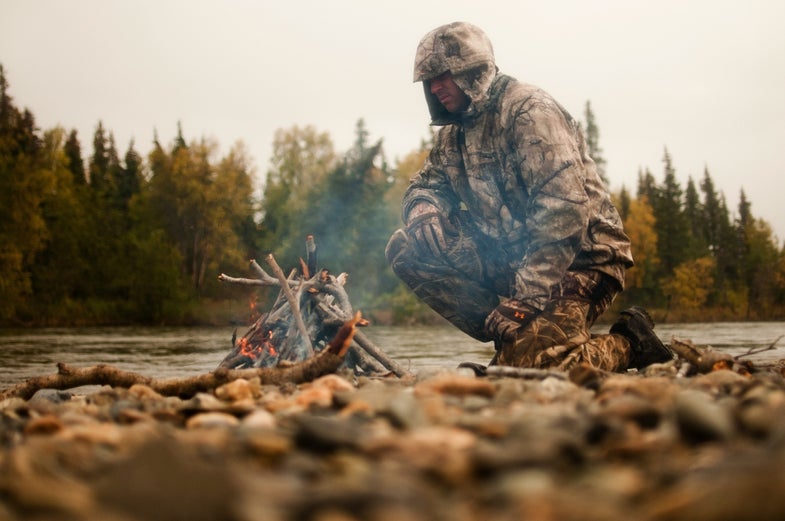 In my long career of shooting bullets into living creatures, I’ve only twice needed a fire. Both times the locale was Montana; both times I was hunting with someone else; and both times we were not in trouble but it was so freezing cold that we decided that a fire might be nice before we did get into trouble. However, before I go any further, I have to point out that the best piece of writing, ever, on starting a blaze when your life is on the line is Jack London’s To Build a Fire. Read it.

What I’m talking about here is not starting a campfire to toast marshmallows when it’s 70 degrees out and you’re sleeping under the stars, or building a fire in a sheepherder stove inside a canvas tent. I mean making flames when you’ve fallen through the ice, or when you’re going into hypothermia and are on the edge of losing your reason because the blood is leaving your brain and moving into your heart or when you have to signal a search plane and have only a few minutes to get some smoke rising before it’s lost from sight.

Fire making under these circumstances is almost always difficult, and sometimes nearly impossible. First, your hands may be so cold that you have little or no dexterity for a task that requires lots of it. Second, you may be shaking so hard that you can’t manage even simple tasks. Third, if you’re lapsing into hypothermia, nothing will make sense to you and the process will be beyond your grasp.

I’ve noticed that in Alaska, before they leave their cabins for the day, thoughtful wilderness dwellers lay a fire in their stoves so that if they come stumbling back, frozen half to death, they will not have to build one. All they have to do is strike a match. I once watched a friend of mine who was in the early stages of Parkinson’s Disease try to make a fire with bone-dry tinder, kindling, and wood, and be unable to do it. His shaking hand put out the matches when he tried to touch off the tinder. If you are shaking from cold instead of Parkinson’s the result will be the same.

So we can forget about sawing away on fire bows, and cracking open quartz rocks to get a good striking surface, and all the bushcrafter’s schemes for primitive conflagrations. What we’re interested in is instantaneous results under dire circumstances.

Here are some general rules for successful firebuilding. Some are my own, and some have been taken from other folks whose corpses did not end up as dinner for forest critters.

1. Despite the need for speed, gather everything you need before you strike the first match. This includes tinder, small kindling, larger kindling, and logs. Fires thrive on continual attention, and if you go wandering in search of wood for the next step, you’ll find yourself starting again from scratch.

2. Don’t use gasoline, no matter how desperate you may be. If you’re hypothermic and scorched, the odds are against you.

3. Always have three means of ignition on your person. We will get back to this.

4. There’s no such thing as a tinder ball that’s too big. The smallest ones you can get away with are the size of small grapefruit. The biggest can be as large as a really well developed fibroid tumor.

5. Rehearse. The time to learn how to build a fire is not when your life depends on it. I’ve seen lots of first-time efforts, including my own. They were not pretty.