newsroom/Downloads/Hunting7_print.jpg)_ Until you miss a wild turkey, you wonder how anyone ever manages to whiff a shot at one. A... 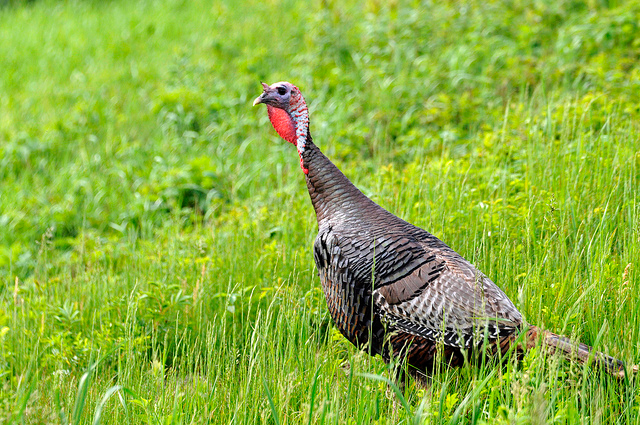 Until you miss a wild turkey, you wonder how anyone ever manages to whiff a shot at one. A turkey presents a stationary target. You have a shotgun. What could possibly go wrong? Well, several things, actually. Here are eight I can think of off the top of my head, some of which I have learned about the hard way.

**1. Your gun doesn’t shoot straight **
Turkey loads and chokes pattern tightly. Not all shotguns shoot exactly to the point of aim. A gun that shoots off target and a tight, unforgiving choke is a dangerous combination. If you didn’t take the time before the season to make sure your gun shoots where you aim it, you can easily miss.

2. Your turkey got too close
I once missed a tom at five steps. A turkey choke prints a pattern the size of a golf ball at that distance. Some people say you should shoot for the body when they’re that close, but at that range, it’s like shooting a bird with a shotgun slug. You’ll kill it with a body shot, but you will make a mess and tear up a lot of meat, too. If a turkey slips that close to me again, I’ll try to keep my cool until it wanders off to 15 or 20 yards before I shoot.

3. You aimed at the head
If you aim at the turkey’s head, you waste half the pattern over the top, and besides, turkey heads can bob and move around. I prefer to hold lower down on the caruncles (we call them “wattles” but they’re not) on the turkey’s neck, which presents a more stable target and puts all of the pattern on the bird.

4. You didn’t shoot from a rest
If you hunt from a blind, as many people now do, include shooting sticks or some type of gun rest in your gear. Holding a gun up on a turkey’s neck waiting for the right shot can lead to shaky arms and a bead that wobbles all over the place.

**5. You went into the future **
“Going into the future” is a term clay target shooters use. It means you start thinking about the pictures you’re going to send to your friends of your turkey before you pull the trigger. Even on an easy shot, you have to stay in the present moment and focus on what you need to do to make that chip shot. Otherwise it turns into a miss. Don’t ask me how I know about this one.

6. You flinched
No one feels recoil in the field, but it can still have an insidious effect. If you did a lot of patterning without some padding between your gun and your shoulder or a lead sled, you may have developed a flinch that comes back to haunt you in the woods. I usually drape a gun case over my shoulder as an extra pad at the range.

**7. You got turkey fever **
If you’re not getting excited, you shouldn’t be turkey hunting. That said, when your heart starts pounding and your thinking gets fuzzy you have to keep it together. The most common turkey fever mistake is shooting too soon. Pick a tree, a stone, whatever and tell yourself not to shoot until the bird reaches it.

8. You lifted your head
Lifting your head off the stock, whether from a flinch or simply from an urge to get a better view of the turkey falling over, invariably sends your shot high. Most turkeys, I would guess, are missed over the top. Having made such a miss once (well, maybe a couple of times) my mantra when a turkey approaches is: “Kill him through the gun.” This is another clay target shooting phrase that means “keep your head down all the way through the shot and after.”