Nothing has changed upland hunting as much in my lifetime as electronic collars. Training collars, tracking collars and beepers existed... 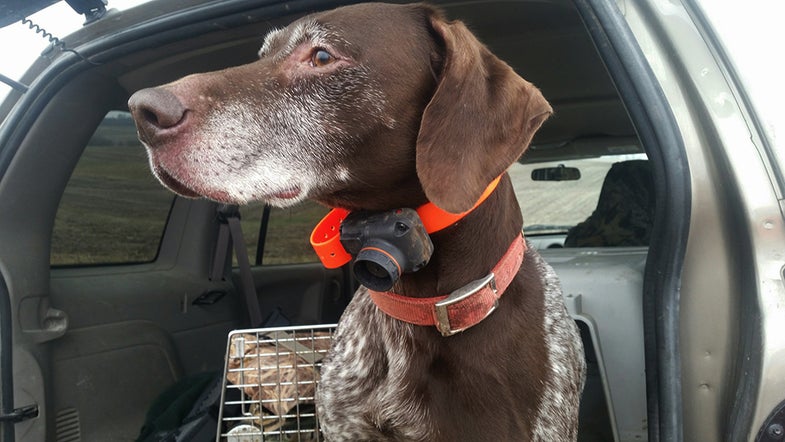 Nothing has changed upland hunting as much in my lifetime as electronic collars. Training collars, tracking collars and beepers existed when I started bird hunting, but they were terrible, unreliable things: they were huge, they burned through batteries, and they broke down all the time. No longer.

The collar on Jed’s neck is a Dogtra 2500 (dogtra.com), one of three collars I currently own (the other two are a TriTronics Upland G3EXP (garmin.com) and a D.T. Systems H20 1850 (dtsystems.com). I have never had a lick of trouble with any of the three. The Dogtra is my favorite right now because it is so compact. The collar unit contains the trainer and the beeper both. I can turn the beeper on and off with the remote, which is a very nice feature, as it saves me from having to listen to my dog beep like a dump truck backing up when I don’t have to. I can change the tone of the beeper from high to low, the intensity of the trainer’s shock by twirling a dial, and see at a glance how much charge I have left.

They are all a far cry from the collars I started with in the 80s, which were constantly on their way to the Collar Clinic in Traverse City for repair. And, my first beeper collar was the size of those brandy casks St. Bernards wear, and it ate a fresh set of batteries in an afternoon.

Collars are only inhumane if you use them improperly or you can’t control your temper, in which case, you might need a different hobby. What a collar does is allow you to correct a dog instantly. You rarely have to correct a dog. I might have corrected Jed five times last season. Used wisely, an electronic collar is like a half-mile long check cord.

A collar can even keep a dog safe. Trainers in rattlesnake country snakeproof dogs by putting them near a snake, then shocking them. My setter Ike used to chase deer, and after scaring me by chasing some out onto the ice of the local reservoir, then breaking through (he was 50 yards offshore. Fortunately the water turned out to be only a foot deep), I put a collar on him for the next few hunts. When he jumped a deer and took off after it, I didn’t say a thing and gave him a long, hard shock. He never chased deer again.

Because I hunt in tall grass with a short, brown dog, I rely on the beeper part of the collar much more than I do the trainer part. Jed never goes far, but he covers ground fast and the beeper lets me know where he is whenever I lose track. Tracking collars work even better than beepers. During my recent quail hunt in Arizona, trainer Chad Smith used a Garmin/TriTronics tracking unit to keep tabs on three dogs at once, which allowed him to let the dogs range far enough in broken country to put us into lots of birds. They were often out of sight, but a glance at the receiver let Smith know exactly where and how far away each dog was, and whether it was stopped on point or running. As he put it, “I’d rather hunt without my gun than this tracker.”