Ethics Question: What Do You Do When You Find a Dead Duck?

A couple of weeks ago during teal season, I hiked back to a bay that teal like to use on... 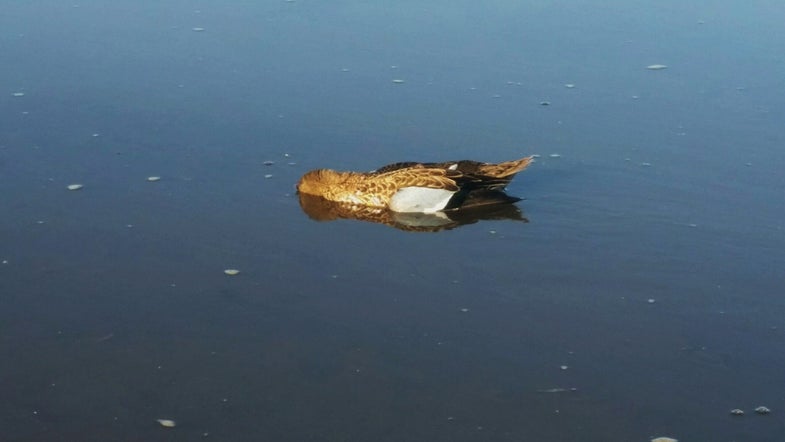 A couple of weeks ago during teal season, I hiked back to a bay that teal like to use on migration days and found it full of ducks, probably 600 or so. Five hundred and ninety-nine flushed when they saw me, leaving one behind, dead in the water. I had no idea why it had died, or when.

Since the dead duck marked the spot where the birds had been sitting, I set my decoys nearby it. The teal came back immediately and were practically swirling around me as I threw out decoys and worked on a little blind. It was not a question of if I would shoot a limit, it was how a question of long would it take. (The answer was 45 minutes, including several spent looking for and finding one that fell in heavy cover, some picky shot selection, a little bad shooting, and, once, trying to shoot a duck with an empty gun).
At first I let the dead duck lie in the water. But, as I neared a limit, I had a dilemma.

Should I:
1. Just let it lie there, shoot a limit of six ducks and go home? If the game warden stops by (they are out during teal season), what do I say? “That one floating in my decoys? It was already dead when I got here.”

2.Pitch the duck into the weeds, and shoot a limit?

3. Shoot five, and add the dead duck to my limit and take it home?

4.Pick the duck up, perform a quick post-mortem to see if it’s good, keep it if it is, toss it if it’s not?

(I chose 3. It was slightly warm when I picked it up and completely fine when I dressed it. It was fat and healthy and didn’t have a mark on it. I have no idea why it died. A friend speculated that it crashed into another duck on takeoff. Who knows.)