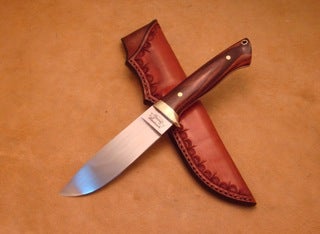 I got my first fixed-blade knife in 1952. I got my first custom knife, a Randall, in 1957. Since then I’ve gone through God knows how many knives of all kinds and never really succeeded in scratching the itch. So I e-mailed Lamont Coombs, of Bucksport, Maine, who makes about as good a knife as anyone, anywhere, and said I wanted a hunter, 5-inch drop point blade with lots of belly, a cocobolo handle, and bronze hardware. Also, I said, I wanted to be able to get the thing sharp*.

The steel Lamont chose was not one of the new high-tech dedicated knife steels, but a real old-timer designated as 1095. It has been around forever, and is not just low-tech, but no-tech. It has a respectable amount of carbon and the merest soupcon of manganese, and that’s it. If a cloud passes over the sun, it rusts. But it has character and funk, and boy can you get it sharp.

Lamont gave the blade a differential heat treatment, meaning that the edge and point are considerably harder than the spine, but the blade remains very strong and should you become insane and try to pry with it, it will not break. This is how Japanese swordsmiths tempered katana blades. These artists left a hamon, or temper line, where the hardnesses diverged. Lamont, through his own dark powers, was able to do the same thing here, and you can just see it in the photo.

Over time, tool steel like 1095 blues with use. It acquires character, like a good wood stock that darkens with age. Stainless cutlery steel that has 12 to 16 percent chromium in its alloy won’t do this, nor will it rust, except when it’s abused badly. The most popular of these steels is the 440 series, which I detest cordially because I can’t get a blade made of this stuff truly sharp, and I’m handy with a hone.

Old, low-alloy, no-chrome steels, on the other hand, take an edge like a razor, and do it with very little effort. I find that if I wave a 1095 blade within a few feet of a Crock Stick, I can shave with it after a few seconds.

Lamont will work with most steels, but he says that if you want a knife that’s for fondling or collecting, 154-CM is best. It rusts only with difficulty, and still makes a very good knife. For hard use, such as in a camp or survival knife, he favors D-2 which resists rust fairly well and gets very high marks in the edge-holding and toughness categories.

For those of you who are curious about this business, see A.G. Russell’s website. A.G., God bless him, has put together a chart showing the specs of every cutlery steel you’ve ever heard of, plus a lot you haven’t.

Lamont’s e-mail, should you be so inclined, is theknifemaker@hotmail.com.

*There are a great many tests for sharpness, but the best one that I’ve found is this: If a blade will shave the hair off your arm, it’s sharp. If it won’t, it ain’t.