Dove season is less than two weeks away, and now is the time the once-a-year visitors show up at the... 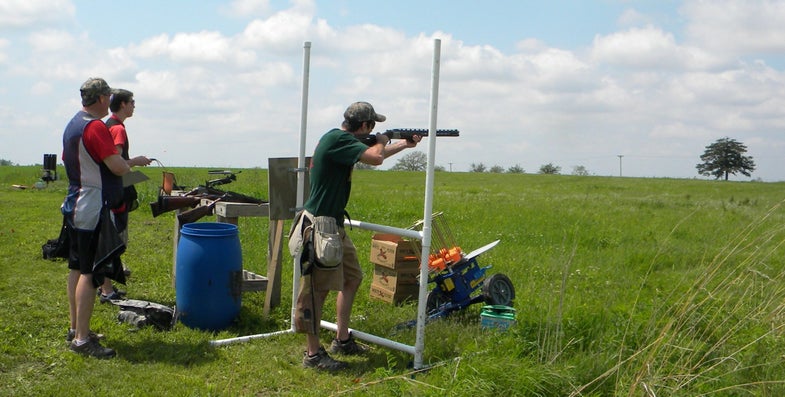 Dove season is less than two weeks away, and now is the time the once-a-year visitors show up at the gun club to work the kinks out of their swing. Others would like to practice, but are intimidated because they don’t know gun club etiquette. If you belong to one of those two groups here are some dos and don’ts to see you through a couple of pre-season rounds of trap, skeet, or sporting clays.

You will need eye and ear protection, and some kind of pouch or vest for your shells and empty hulls. A hunting vest is fine. So is a hunting gun, although if the gun club regulars look askance at your shotgun, it’s not because it’s cheap, it’s because it’s a hunting gun, and hunting and target shooting are two different activities requiring different kinds of guns. For safety reasons, do not bring shells loaded with shot larger than 7 1/2. This is also a rule at most clubs.

Usually, you will that find gun club regulars welcome new shooters. Some will even offer advice. About half that advice may even be helpful. If an experienced shooter tells you where to hold your gun before the shot, where to look for the bird and where to break it, pay attention. It makes a big difference. Otherwise, it’s up to you to figure out when to take advice and when to smile and ignore it.

Trap has the reputation as the least friendly of the shotgun sports, which is only partially deserved. Trap shooters do complain a lot, and they are the fussiest about having the timing of a squad disrupted by a new shooter. That’s because trap isn’t about marksmanship, it’s a game of rhythm and focus. One person can make a whole squad shoot worse.

**Load One Shell at a Time **
It seems obvious, but I see new shooters stuff magazines full of shells on the trap field all the time. Your action should be open and your gun unloaded until it’s your turn to shoot. You can have a shell in the chamber and the action open as you wait, then close the gun when it’s your turn.

**Shell Catcher **
You don’t want your hulls to hit the ground or, worse, the person next to you. Hold your hand over the breech of a break action to catch the ejected hull and put it in your vest pocket. If you shoot a semiautomatic, put a fairly stout rubber band around the receiver in front of the bolt handle to keep shells from ejecting.

Quiet
Keep quiet during the round. This goes double if the traps are voice-activated, because any time you talk, they throw a bird. There is plenty of time to talk after the round is over.

**Rhythm **
Be ready to shoot when it’s your turn. Don’t rush, but don’t dawdle either. Take your safety off before the round starts and leave it off until you’re done. You will only annoy yourself and everyone else when you forget to take it off.

Skeet shooters are generally a more laid-back during a round than trap shooters. You can usually chat between shots, although you want to keep it down when someone is actually shooting.

**Don’t Load Until It’s Your Turn **
A lot of hunters want to load their guns as they are walking up to the station. Don’t. Your gun should be empty and open and your hands should be off your shells until you’re standing still on the concrete pad.

**Load One or Two **
You can load two shells for high and low house singles if you want to, or just load one at a time. The only exception is the last station, station 8, where you load only one. In some squads, everyone will shoot high house 8, then everyone shoots low 8. In others, you take one turn to shoot high and low 8 as you do on the other stations. Strictly speaking the former is the “right” way, but just be ready to follow what everyone else does.

Pick Up Your Hulls
Unless the club has a rule against it (at some clubs if an empty hits the ground they own it) pick up your hulls either after each station or at the end of the round.

Sporting clays is usually the most convivial game of all. Unless you are shooting with people who are really stuffy, you can chat, say “nice shot!” and possibly even talk some friendly smack. It’s also completely appropriate when you are shooting to turn around (muzzle stays downrange) and ask your squadmates what you’re doing wrong. Sporting clays shooters tend to be the friendliest and most helpful of all.

**Bring a Bag **
Besides a vest or pouch, you will need a bag to haul four boxes of shells around the course, plus water and whatever else you want to bring.

**Toss Your Empties **
Most clubs have a trashcan at each station for hulls. Toss ’em. If you’re shooting a semiauto, however, you can just let the empties fly at most clubs.

**Don’t Load Until You Are in the Cage **
You will shoot five pairs at each station. Have a dozen shells in your pocket when it’s your turn to shoot. Do not load your gun until you are in the cage. Load only two shells. The rest of the time your gun is unloaded and your action is open unless it’s a break action and it’s in a gun rack.

**Tip the trap kid **
Some courses are completely automated but a lot still have a high school kid that walks around the course with you pulling and keeping score. If I am paying $35 a round I figure $4-$5 is a pretty good tip.

That’s it. (I think). Anything I left out, feel free to add here. Have fun at the gun club, and good luck on September 1.