Heads Up: Shooting from the Prone Position

I was gratified to see that whoever set up Bradley Cooper’s rifle in “American Sniper” included one modification I’ve come... 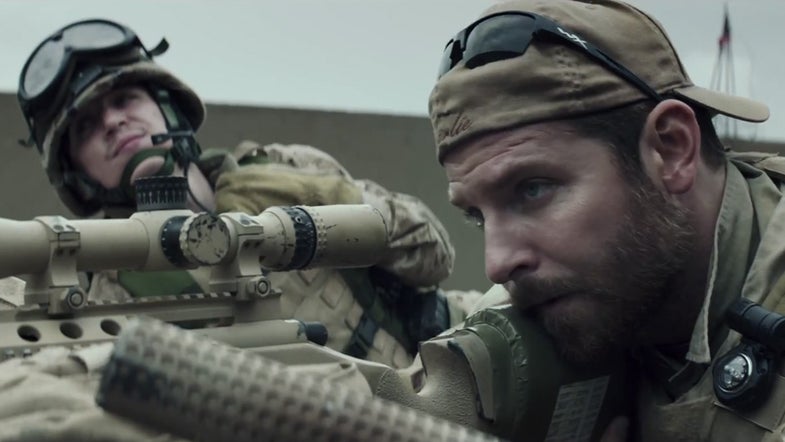 I was gratified to see that whoever set up Bradley Cooper’s rifle in “American Sniper” included one modification I’ve come to rely on for any gun that I’m going to use from the prone position—a couple of wads of closed-cell foam over the comb of the stock, held in place by duct tape. If your stock doesn’t have an adjustable comb, and you need some support for your head, nothing works half as well.

If you’re shooting in any position but prone, your head is more or less erect and you’ll probably have enough comb height to support your cheek and get what the Army used to call a “spot weld.” However, when you’re lying on your belly like a reptile, you have to hold your head up and back in order to keep your eye in line with the scope, and if you do this for more than a few minutes with no support (Snipers have to do it for hours and hours) your head will start to weave and you’ll get cramps in your neck and eventually everything will turn purple and silver and you’ll start to hallucinate, which is not conducive to good shooting.

I’ve tried perhaps half a dozen commercial strap-on comb raisers and they all failed dismally, either because they didn’t stay put or because they didn’t get you up high enough, or both. I have one rifle that requires a 2-inch lift if I’m shooting it prone. So I bought a surplus closed-cell-foam ground pad, such as is issued to soldiers and Marines and similar life forms, and cut two rectangles out of it that measure roughly 5 inches long by 4 inches wide. (I am assured by a recently-retired Army captain that these ground pads perform much better on rifle stocks than they do on the ground.) I tape the first one in place, and if that doesn’t give me enough height, I cut a small chunk out of the second to accommodate the bolt when I pull it back, and tape that on. When I clean the rifle, I untape the top pad and swing it aside to I can get the rod into the barrel without bending it upward.

It’s ugly but it works, which is the highest compliment we can pay a lot of stuff that we rely on. Good movie, by the way.