How Much Ammo for a Day in the Field?

Several years ago, when almost all goose hunting around here was still of the pass-shooting at the refuge line variety,... 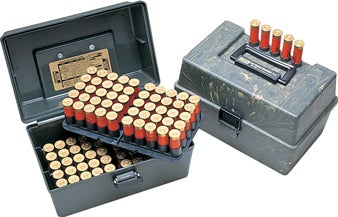 Several years ago, when almost all goose hunting around here was still of the pass-shooting at the refuge line variety, I ran into a couple of guys in the hunting section of our local discount store. They were piling boxes of 10 gauge loads of T and F shot into a shopping cart.
“Looks like you guys are stocking up for the season,” I said.

“Just a weekend,” said one of them, beaming.

Which brings up the question: how much ammo do you carry for a day in the field? My feeling is, you bring enough for a war with whatever you’re hunting. There’s no reason to run out. That means I’ll usually bring as much as I think I’ll shoot, then double that, then add a little more. Take pheasant hunting. If I shoot more than half a dozen times on a pheasant hunt it’s either a great day or there’s something horribly wrong with my shooting, or both. I can’t remember the last time I shot more than ten shells but I’ll usually dump about 15-20 into the pockets of my vest, then add a couple just in case.

For doves I take four boxes, which is more than twice what I expect to shoot even on a good day.

For ducks I usually bring two boxes. Where I duck hunt I am lucky to shoot, period, but every once in a while I’m covered up with ducks. And, while I don’t hunt in very treacherous places, I often go alone, and were I to get bogged down in muck somewhere I’d like to have enough shells on me to fire distress signals until someone found me.

For geese I bring one box of BBs, then throw in a few more. If I can’t shoot three geese with 25 shells I need to find another line of work.

For turkeys I carry 10. That’s a lot, but I will confess to once using seven shells on a turkey hunt under circumstances I do not care to recount here. Now I keep five in my vest, three in the gun and two in my shirt pocket. Not that I will ever shoot seven shells at turkeys again, but why risk it?

Of course, some public areas, like Bayou Meto in Arkansas, limit the number of shells you can bring in. Bayou Meto’s limit is 15, and while I am confident I can kill four mallards with 15 shells and have some left over, it’s also true that nothing burns up shells like trying to swat cripples on the water. Of course, over the two days of my one hunt at Bayou Meto several years ago I shot exactly twice, so the shell limit wasn’t a problem.

The only time I ever ran out of ammunition was on my first dove hunt, the same one I where I lost a bit of my hearing. I had brought four boxes and some odds and ends, and by the end of the day I was begging ammunition from my hosts.

Since then I’ve come close to running out only a couple of times. There was a snipe hunt where I brought a box of shells and killed the twelfth bird to fill my limit with my last shell. There was also a wild, windy, freezing duck hunt in a sneakboat where I stopped one duck short of a limit because I had brought less than a box and had burned up all but one shell. I didn’t want to be left with an empty gun and a lively cripple so I stopped and now I bring more. So, two times what I need plus extra is my ammo formula. What’s yours?