Dry Fire practice with a shotgun works. It smoothes out your gun mount and keeps your eye-hand coordination sharp. Given... 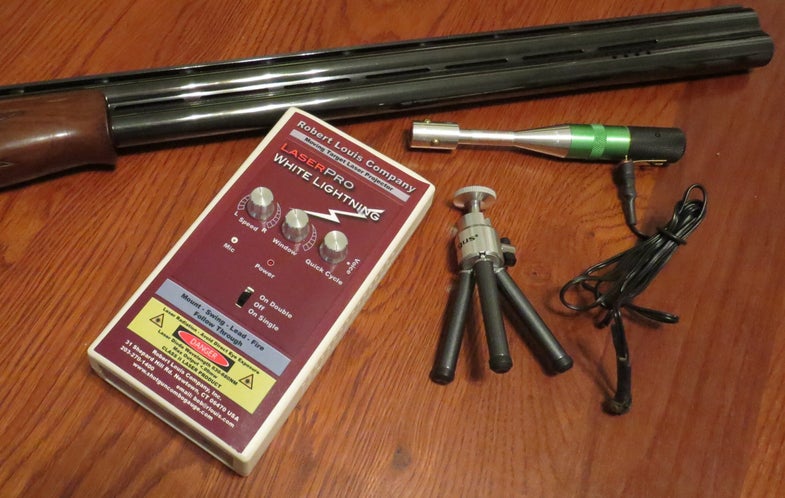 Dry Fire practice with a shotgun works. It smoothes out your gun mount and keeps your eye-hand coordination sharp. Given the price of targets, ammunition, fuel and time to get to the gun club, dry firing is cost-effective, too.

I have written before about using a MiniMaglite in your barrel ($15) and about the Dry Fire simulator ($1150). Lately I have been fooling around with the Ulimate Practice Shooting System from Robert Louis, which is about halfway between the two in price ($479), and about halfway between them technologically. A Maglite just shines a continuous beam; the Dry Fire gives you all kinds of feedback about each shot and simulates trapshooting extremely well. The UPSS lets you trigger a laser beam at a moving dot.

The UPSS has two main components. The first is the Laser Shooter, which slides into the bore of your gun and centers perfectly. A wire connects the laser to the trigger. When you touch the trigger, the laser projects a dot. Used by itself, the laser is an easy way to check gun fit and to practice your mount by focusing on an object on the opposite wall, mounting the gun and hitting the trigger as the butt comes to your shoulder.

The Laser Pro is the other half of the system. It projects one or two red dots on a wall, either as left to right or right to left crossers, or you can angle it to give you quartering targets. You can vary the speed of the dots, too. It sets up in almost any room and lets you shoot at moving dots until your arms get sore. The dots don’t react when you hit them, but it doesn’t really matter. The dot from your muzzle shows you where you’re shooting and you can tell if you would have hit the target as you practice your swing. It’s great for keeping in touch with your gun in the off-season and between trips to the range.

As good as dry fire practice is for experienced shooters, it’s even better for beginners. There’s no noise, no recoil and none of the anxiety and over-excitement that comes from shooting live ammunition. A simulator helps new shooters understand how a gun has to move to intercept a target, as well as the importance of keeping their head on the gun so it shoots where they look.

For instance, I have been trying to teach the mother of one of the kids on our trap team how to shoot this summer. It has been a challenge to say the least. Her head would move all over the stock so she rarely shot in the same place twice. We had four lessons, and if threw 50 targets for her, she might hit somewhere between one and four of them.

So, rather than have her keep on missing targets and getting frustrated, I tried a different approach. I gave her the laser out of the kit, and told her to take it home and practice for ten minutes a day for two weeks, until she got her head on the stock consistently.

Two weeks went by and we had another lesson.

Me: “Did you practice with your laser every night?”

Me: “Did you practice at all?”

I gave her a five minute indoor lesson. First I had her pick a point on the wall and shoot the laser at it until the gun hit where she looked. Then I turned on the Laser Pro and had her shoot a few left to right and right to left targets.

After that we shot at real targets. She crushed the very first one and probably broke 20 out of 50 and, while she already thought shooting was fun, she thought it was really fun now that she was hitting targets. I sent her home with the laser again, and, having seen the results, I bet she practices with it this time.

The only problem I have had with the LaserPro projector is with the tripod it comes with, which won’t support the unit if you want to angle it. I use a small Gorillapod with mine instead.