On my recent trip to Uruguay, we shot lead at ducks, which I hadn’t done since my last trip to... 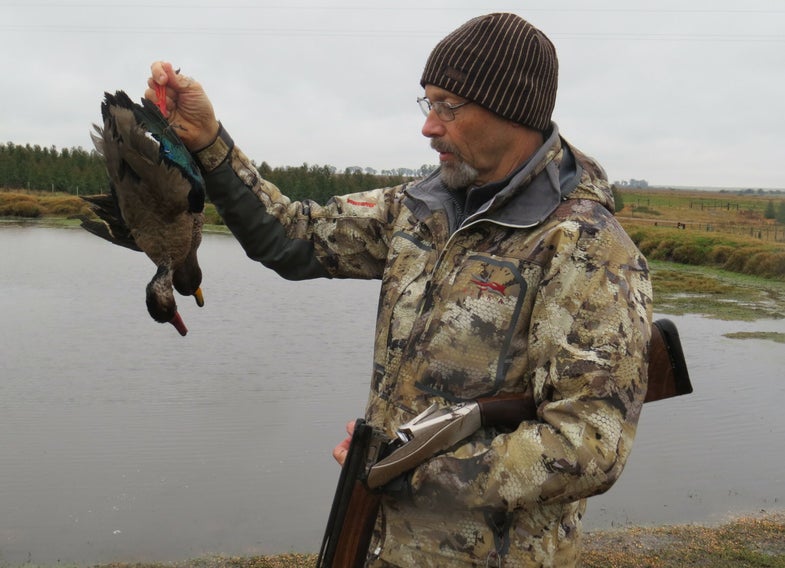 The author with a pair of South American ducks. The larger bird is a Brazilian teal, the smaller one is a silver teal.. Phil Bourjaily
SHARE

On my recent trip to Uruguay, we shot lead at ducks, which I hadn’t done since my last trip to South America in 2004, as lead is legal down there and illegal here. And, I was reminded once again that lead makes a very effective waterfowl load. We shot Fiocchi 1 ¼ ounce loads of 5 shot and the first morning of our trip I made some long backup shots on lightly hit ducks that folded up like dishrags when the pellets hit them. A couple of them were long enough that I surprised myself. This time I was shooting a 12 gauge, but on my previous trip to South America I shot a 20 gauge and an ounce of 5s and killed my 20-duck limit every morning with no trouble at all.

After the hunt I mentioned this to Benelli’s George Thompson who said: “They didn’t start making steel shot because lead didn’t work.” True enough.

It’s not that steel doesn’t kill ducks. The loads we have now are very good, and my crippling losses are low, even hunting without a retriever. But, lead just seems to kill them “deader” in the air. Often there’s a noticeable difference in the way the birds react when they’re hit with lead as opposed to steel.

At least, that was my takeaway from our first duck hunt. On the second morning, I wasn’t quite as much on target as I had been the first day, and I was hitting birds around the edges. I didn’t lose any ducks, but some that I shot fell with broken wings and required finishing shots (or, in one case, required me to run after one in a pasture and make a spectacular faceplant in the mud as I tried to cross a small creek at full speed. I got the duck.) I also centered a pigeon that came into the decoys only to have it fly off, then crash dead fifty yards away, but the pigeons in South America are big, tough and practically bulletproof so that doesn’t speak to the effectiveness of lead. Those birds need depleted uranium pellets.

The real lesson from those two hunts is that no matter how lethal your ammunition, you still have to center birds with it to kill them cleanly, whether you’re shooting lead or steel. Or uranium at pigeons. It’s sort of like the analogy rifle hunters draw between a .30-06 and a .300 magnum. A bullet from either one in the right place kills cleanly, a bullet from either in the guts doesn’t, although the magnum might give you just a little more margin for error.

As I mentioned, the steel and other non-toxic loads (make mine HeviMetal) kill birds well enough, and if we really are poisoning fewer ducks, geese and eagles, and I believe we are, then steel for lead is a good trade. But, it was still fun to see lead pellets hammer ducks again.