The main reason most upland hunters miss flushing birds is because they shoot too soon. That’s my conclusion, anyway, after... 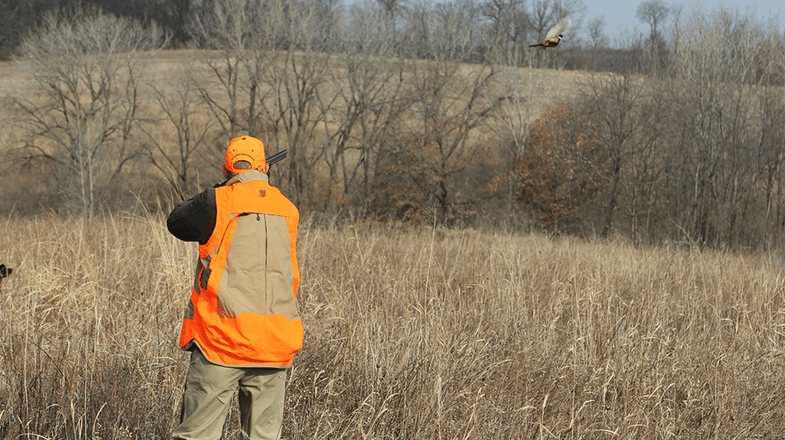 The main reason most upland hunters miss flushing birds is because they shoot too soon. That’s my conclusion, anyway, after once again doing my annual turn as a “celebrity” in a local charity hunt/shoot (Aimingforacure.com; a good cause). It’s the one time of year I hunt with regular hunters — as opposed to people like me, who hunt and shoot all the time and are eaten up with it — and I get to watch average hunters shoot. Not surprisingly, since they rarely practice, they shoot birds the way I shoot pool.

The hunt portion of the event is a preserve pheasant hunt. We line up and follow some very good dogs through a field full of put-and-take pheasants. Because I am the celebrity and everyone else is a paying customer, I figure it’s my job to let them do the shooting and say “Nice shot!” when a bird falls. If they miss, I shoot backup. So I have lots of chances to watch people shoot flushing birds on these hunts. Almost everyone reacts to the blur of the bird by opening fire immediately. They either miss or if they don’t, they often mangle the bird or scratch it down the pattern fringe. I usually have plenty of time to wait for everyone to empty their guns before I shoot whatever birds I shoot during the hunt.

Conventional wisdom says hunters get distracted by the pheasant’s long tail. I don’t believe that. If it were true, you would see tails shot off. I have shot a lot of pheasants and have seen a lot shot and I have never yet seen one get de-tailed. Instead what happens when you try to shoot fast is that your head isn’t on the gunstock, and you’re shooting at the whole bird before you actually lock your eyes onto the front end. Shots taken that way are almost always missed over the top, not behind. Once pheasants are under power, though, people aim at them and miss behind. However, they don’t miss and hit the tail, they miss by many, many feet behind.

I can relate, though, to panic-missing at pheasants. It took years and a couple hundred roosters under my belt before I learned to remain calm when a bird flushes at my feet. You really have a lot of time to let a pheasant get out to where the pattern opens up. I’ll step toward the bird but keep the gun down and watch the bird, then mount and shoot when it’s reached 20 or 25yards. That approach works, but it has its downside, too. Years ago I was on a guided hunt in Nebraska and I walked in on a point. The pheasant flushed, I watched it go, waiting until it was far enough out to suit me. Just before it reached 20 yards or so the guide shot it. I gave him a look.

He said “I’m sorry, I wasn’t going to shoot but I looked over and you were just hanging out. I didn’t think you were shooting.”

You’ve got time when a pheasant flushes underfoot – even time to hang out for a while.