For handloaders in particular, and serious shooters in general, a chronograph is as necessary as a stethoscope is to a... 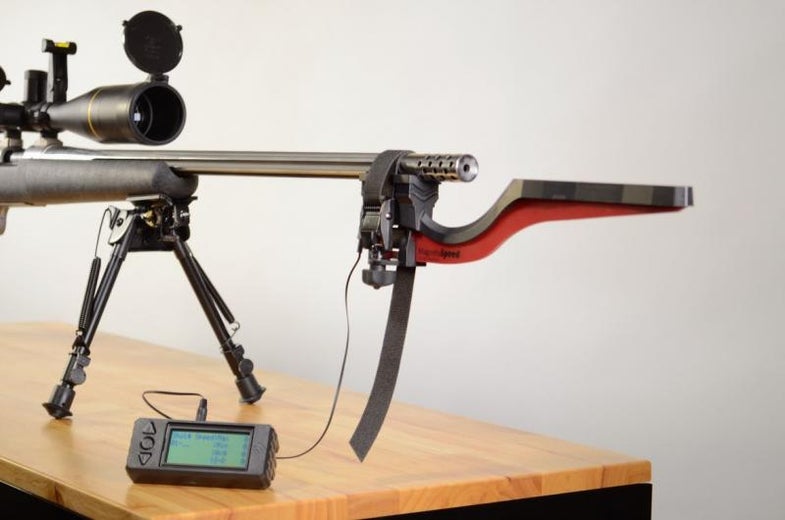 For handloaders in particular, and serious shooters in general, a chronograph is as necessary as a stethoscope is to a doctor or a faulty computer to a member of the IRS. After you use one a while, you feel blind without it, and you are.

I got my first chronograph in 1987, and for years before that had used other people’s. It was very simple and accurate, but like all other chronographs save one, it relied on light to measure bullet speed. You inserted a pair of cardboard aiming placards in the top of the device, clipped a pair of sunshades over them (bright sunlight bad) and backed off 15 feet so the muzzle blast wouldn’t blow the placards away and give you an ERR reading.

Because the range at which I shot sloped sharply downhill ahead of the benches, I had to put the chronograph next to the benches and shoot from 15 feet behind the firing line, which meant that I couldn’t use the thing if anyone else was there. This meant that you became very proficient at the kneeling position, or you could blast your chronograph into eternity. All things considered, it was a major pain in the ass.

So, when I was looking for a new chronograph, my eye lit upon one called the MagnetoSpeed, which uses electromagnetic sensors instead of optical sensors.

Now, a brief digression. Generally, I regard the advent of any new technology with the same joy that I would the acquisition of a cold sore, or a major case of leprosy. Once in a while, however, I have to forget the curmudgeon s**t and admit that some new stuff is marvelous. Such is the case here, and thus endeth my digression.

The MagnetoSpeed consists of three parts: A plastic arm that straps to the muzzle and contains two magnetic sensors, a connecting cable, and the display unit, which on the newest version is a little bigger than a package of cigarettes. (The plastic arm is called the Bayo. I have no idea what a Bayo is. Perhaps it’s short for bayonet, since it works on somewhat the same principle. They can call it Jim Ed or Obadiah for all I care.)

In use, you strap the Bayo to the muzzle, check to see that it’s below the line of the bore, plug the cable into the Bayo and the display unit, and shoot. Quoting from the MagnetoSpeed website: “Our unique method determines velocity by sensing the difference in time between a slight disturbance in the two magnetic fields as the bullet passes by. This is somewhat similar to the way that an electric guitar senses the vibration of its strings to produce amplified tones.”

It is brilliantly thought out and dead simple to use.

The whole package is so small that you can carry it in a two-gun pistol case and have room left over for a tuna melt. The price for the third generation V3 model is $399. There are less expensive chronographs around, but the advantages to the MagnetoSpeed are so overwhelming that I would opt for it in a heartbeat. You can get one from Brownell’s or Midway Shooters Supply or, if you live in New Zealand, from Wilson’s Hunting and Outdoors in Wanganui, Manawatu-Wanganui. MagnetoSpeed.com