The Bergara B-14 is a new, plain-vanilla, wood- or synthetic-stocked bolt-action that comes in our most useful calibers, costs around... 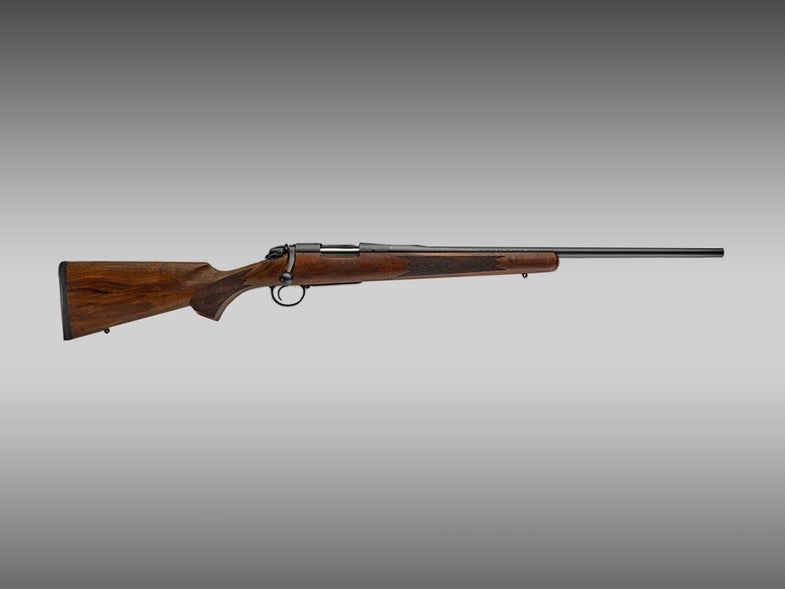 The Bergara B-14 is a new, plain-vanilla, wood- or synthetic-stocked bolt-action that comes in our most useful calibers, costs around $950, and is made in Spain by the Basque barrelmaker of that name who, a couple of years back, opened a custom shop in Georgia. The shop is run by Dan Hanus, a retired Master Gunnery Sergeant who, during his time with the Corps, built rifles for Marine snipers and target shooters, and it specializes in virtually perfect firearms that are mostly tactical, with some made for hunting.

Custom Bergaras, the Premier Series, are not cheap. Mostly, they run in the $3,000 to $5,000 range. They are, however, superguns, and people are perfectly happy to keep the custom shop overworked.

Now, Bergara is expanding into a niche that has seen very little action lately—the $1,000 bracket. They’re going with three rifles they call the B-14 series. The B-14 Hunter ($825) is synthetic stocked; the B-14 Timber ($945) is nice-looking walnut with a Monte Carlo comb and a cheekpiece; the B-14 Woodsman (also $945), the rifle I got to test, is dead-plain walnut with no Monte Carlo and no cheekpiece.

Other than the stocks, they are as alike as peas in a pod. All are based on Bergara’s own bolt action (unlike the Premier Series, which is built on the wonderful but costly Stiller custom action). All of them come in .300 Win Mag, .30/06, .270, .308, 6.5 Creedmoor, and 7mm Remington Mag. The long-action rifles have 24-inch barrels, the short action, 22-inch. The barrels are made by Bergara. (Who did you expect? Douglas?) With a few exceptions, the three rifles come with a choice of hinged floorplate or, for the road hunters, a detachable box magazine.

What Bergara has not done with the B-14 series is re-invent the bolt action. There’s nothing cute, or clever, or tricky about the rifles. The bolt nose is slightly coned, and the recoil lug fits into a recess in the receiver instead of being jammed up against it by the barrel, but otherwise they’re very simple, conventional rifles.

They’re also damned near perfect. The inletting is so clean it looks as if it was sunk by a die. The action is epoxy-pillar bedded, and the contact they get on the pillars and the tang is flawless. You can take my B-14 apart, screw it back together, and it shoots to the same point of impact. The barrel is free-floated, and the clearance around the metal is dead even all the way up through the fore-end.

The trigger on my rifle breaks at 3 pounds, and has a tiny bit of creep. I could say that this is a hallucination on my part, but my gunsmith and spiritual advisor John Blauvelt found the same thing. Since the rifle shoots the way it does, I don’t plan to lose any sleep over the trigger.

In the next post, we will talk about accuracy, of which there is lots and lots.