The Weatherby Accumark is not a new rifle, but it’s out this year in a substantially improved version and in... 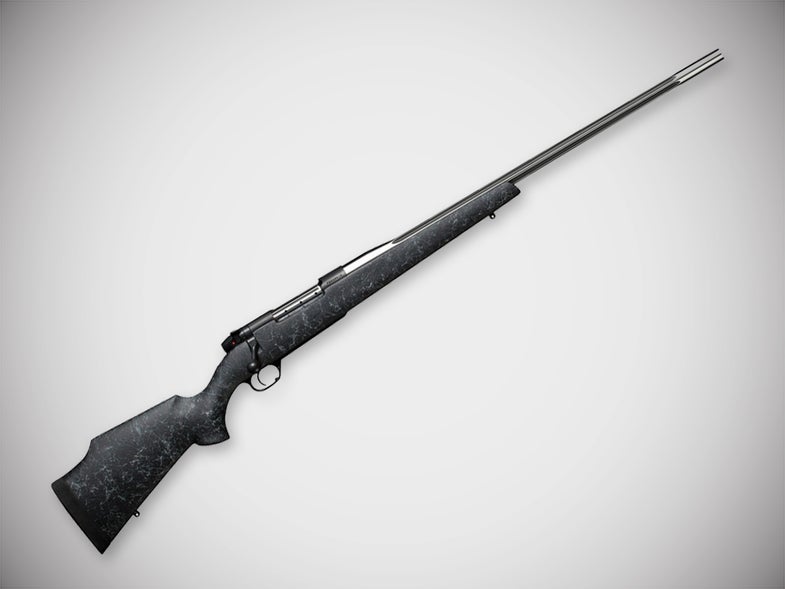 The Accumark, as Senior Drill Instructor Hartman would put it, is not your daddy’s squirrel rifle.

The Weatherby Accumark is not a new rifle, but it’s out this year in a substantially improved version and in a brand new caliber, and since I haven’t written about it in a while, this is the time to take a fresh look.
The Accumark, as Senior Drill Instructor Hartman would put it, is not your daddy’s squirrel rifle. It’s not an all-around rifle or a general purpose hunting rifle. It’s a big, heavy, expensive gun that’s designed to shoot huge, terrifying cartridges with great accuracy and take big game at very long range.

It was introduced in 1996 in conjunction with the sphincter-strangling .30/378 cartridge and, just as the classic Mark V Weatherby was a rifle of the 1950s, the Accumark was a gun for its time; one of the very first hunting rifles—maybe the first–to anticipate the long-range shooting craze that began in the late 90s and carries on to this day.

Building a hunting rifle that’s light enough to carry and can still shoot bullets backed by 80 to 120 grains of powder is no easy job. It’s one of the iron rules of riflery that the more powder you burn, the more difficult it is to put all the bullets in one place. This is because of the stress on the rifle and the stress on the shooter alike.

Weatherby starts with its Mark V action, which has been around since 1958 but has changed very little over the years. The Mark V employs 9 or 6 (depending on the size of the cartridge) small locking lugs rather than two or three large ones, at the head of a piston-like bolt.

The action is machined rather than cast, and is horrendously strong. Back in the 50s, experimenters were routinely loading his cartridges to demented levels, so Roy Weatherby and Fred Jennie designed it to withstand 200,000 CUP (Copper Units of Pressure) rather than the 70,000 which is standard. A Montana gunsmith friend of mine once tried to blow a Mark V on purpose. I won’t tell you what he did, but it would turn you puce, and he failed. The case was no longer usable, and the bolt had to be opened with a mallet, but nothing else had changed.

Weatherby uses 26-inch, stainless-steel #3 contour barrels that are hand-lapped, every one of them, and very slick barrels they are. They’re also fluted to save weight, and Weatherby is one of the very few companies whose flutes are deep enough to have a real effect. Most are so shallow that they’re purely cosmetic. The grooves themselves are blued, while the raised sections are polished bright. It’s very cool looking.

The Accumark stock has always been made by Bell & Carlson. It’s a mixture of Aramid fibers, fiberglass, and graphite fibers laid around an aluminum girder that extends from the fore-end down through the pistol grip. Synthetic stocks can flex, which is an accuracy killer, and some of them do. Aluminum girders, however, do not flex.

In past years, the Accumark stock had a clubby feel to it, but it has been given new, slimmer, sharper contours, and the pistol grip in particular is smaller in diameter, and even has a Wundhammer swell, which feels swell.
The original Accumark trigger was decent enough, but Weatherby has come out with a new one called the LXX, and it’s a lot better. It breaks dead clean and can be adjusted down to 2 ½ pounds, which is about as light as any sane person wants on a hunting rifle. Mine breaks at 2 pounds, 12 ounces, and is consistent down to the ounce.

Now it’s time to deal with two Weatherby-related subjects I see on the Internet a lot, written by people who aced Mechanical Engineering and flunked English.

The first is freebore. This is the short section of the barrel ahead of the throat (on a .300 Weatherby, for example, the freebore is .361) where the rifling has been cut away, leaving the bore smooth. One of the truisms among people who load for accuracy is that freebore must be minimized, or done away with altogether, by seating the bullets so far out of the case that they touch the rifling, or nearly touch it.

The theory behind this is that if the bullet is not seated in the case with perfect concentricity and is allowed to jump unguided into the rifling, it will be deformed and will not fly true. Then why freebore a barrel? Because that unrestricted jump allows the bullet to gain velocity very rapidly and can dramatically lower chamber pressures at their peak.

Roy Weatherby, seeking extremes of velocity, took to a long freebore early on. It worked. He could seat his bullets farther out of the case, allowing for more powder, and the freebore did indeed cut pressures.

However, some shooters (most of whom had probably never fired a Weatherby) seized on this and proclaimed that Roy had opted for lots of freebore at the cost of accuracy. I’ve been shooting Weatherby rifles since 1965, and have owned probably 15, I can tell you this is horsesh*t. I used to see Weatherbys printing ¾-inch and 1-inch groups back in the 1960s when you did not see this from big-game rifles. Weatherby guarantees the accuracy of its Mark Vs, and I believe it was the first company to issue an accuracy guarantee.

Over the years, Weatherby has fine-tuned its free bore dimensions so that they’re quite different from the ones used in Roy’s original rifles. The .240 Weatherby, for example, has less freebore than a .243 Winchester.

I’ve heard it said that Weatherby ammo can’t be used in standard rifles chambered for Weatherby rounds because that mythical long freebore is calculated into the powder charges. Not so.

I think that high-pressure nonsense got started because Norma has been loading Weatherby ammo since the days of the Vikings. At that time American ammo makers loved to skimp on the powder, but Norma did not. If your box of 7mm Weatherby Magnum ammo said that its 160-grain bullets were going 3,060 fps, that’s what you were getting.

And then there’s barrel life. If you want a big gain in velocity, you need a disproportionately huge increase in the amount of powder you burn. I know of two street-legal automobiles that can go from zero to 60 mph in a shade over 2 seconds, but to do this they have to generate over 1,000 horsepower. If you’d settle for 0-60 in 4 seconds, you could get by with 650 hp.

With a 1,000 hp car, you consume lakes of gasoline, burn up your tires in a heartbeat, and probably have to replace your expensive brakes fairly often. With a huge-capacity cartridge, you squirt an enormous flame up the barrel at high pressure, and therefore high temperature, and you literally melt the rifling.

Who cares? You don’t buy a supercar for good mileage. It’s a highly specialized machine. Same with the Weatherby magnum rifles. They’re highly specialized machines, and if your barrel burns out after 600 rounds, so what? (I’m using this figure as a for instance. I have no idea if any of the Weatherby barrels burn out a barrel this fast. My .300, from 1965, and my 7mm from 1970, still shoot just fine.) Six hundred, or 800, or 1,000 rounds is a lot of shooting for a limited-use big game rifle, probably a lifetime’s worth and then some.

I see that this has gone away from the Accumark. That’s OK. There’s a lot of nonsense out there about Weatherbys and this seemed as good a place to set the record straight.

Here’s something else to keep in mind: Weatherby started his business in 1945. Bill Ruger started his in 1949. Weatherby began with a radical looking, expensive big game rifle. Ruger began with an inexpensive .22 pistol that looked a lot like a Luger. Since then, both companies have flourished, although they have continued in very different directions.

Both companies succeeded in part because their founders were very good at getting ink from people like me but in the end, they’re still in business because what they made, delivered.