South America lures wingshooters the way Africa draws big-game hunters. The numbers of birds you see gives you a glimpse... 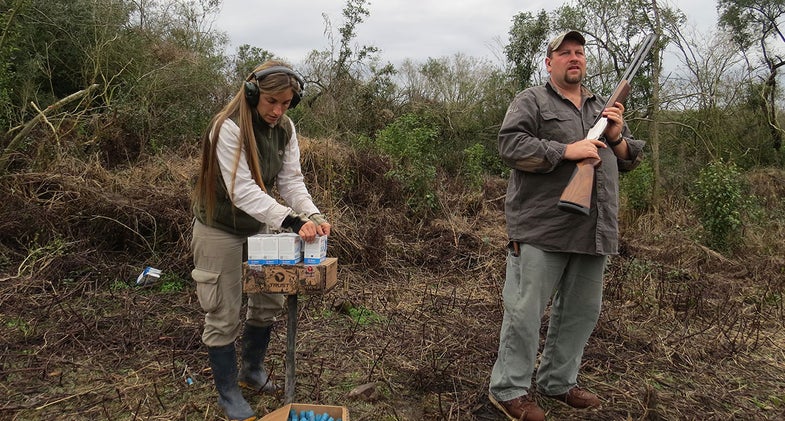 Bird hunters traveling to South America usually have the option of bringing their own shotgun or renting a gun from the outfitter.. Phil Bourjaily
SHARE

South America lures wingshooters the way Africa draws big-game hunters. The numbers of birds you see gives you a glimpse back into what North America must once have looked like. I’ve made the trip three times and hope to go again, as much for the being-in-South-America part (Argentine wine, grilled meat, gauchos on horseback, lots of unusual birds to look at, etc) as for the shooting. If you haven’t gone already, you might want to go to someday.

When you travel to South America, you can take your own gun(s) or rent them from the lodge.

Argentine and Uruguayan outfitters will have someone meet you at the airport to help you get your guns into the country. Many cover the fee as part of the package cost. It took our group in Uruguay last month an extra 20 minutes or so and was no big deal. We were presented with cards bearing our name and the gun’s serial number, told we had to carry the cards and only carry the gun that matched the number on the card. I have taken guns into South America twice, and the first time, it was no trouble at all. This time was a little different.

Getting there was no problem. Coming back was something of a cluster. The TAM (a Brazilian airline) representative in Montevideo thought because I was changing carriers in Sao Paolo that she couldn’t check my gun all the way through. It took a long time and a visit to a small room full of police and customs officers to get my gun on board.

In Sao Paolo, I was presented with a Catch-22. I was supposed to present my gun to customs, but to do that, I had to emigrate to Brazil, which I was not supposed to do. Since it was either abandon my gun or go get it, I went through passport control, who waved me through (they shouldn’t have. I learned much later that I should have had a visa. I entered Brazil very illegally). I got my gun, checked it in with a very nice lady at Brazilian customs, and left it with them. She promised someone would bring it up to me when it was time to check it on my flight to Chicago.

Fortunately, I had a very long layover, because when time came to retrieve my gun, no one brought it up. It took me and Carlos, a very helpful United employee, more than two hours to find it exactly where I had left it with customs. The rest of my group, who flew together through Rio, experienced a similar problem, all of which could have been avoided had the airline people in Uruguay known what they were doing.

Back home I presented the 4457 Dave wrote about earlier, which is good, because the customs officer told me otherwise the gun would have been subject to confiscation. Incidentally, to get a 4457 you’re supposed to take your gun to a customs office (usually at an airport) in person and the agent will, at his or her discretion, issue you the form. I found a helpful customs agent who let me get the form over the phone, but one member of our group went to get her form at LAX and was turned down by the agent, who just decided she didn’t want to give her the form. She had to make another trip back to get it from someone else.

None of this should deter you from taking your own gun to South America if you really want to, but this might be a good time to talk about renting a gun. Most lodges keep a stable of Benellis and/or Berettas which they will rent to you for $50-$70 per day. Since I would take my 20 gauge Beretta 390 down there if I went on my own anyway, I’d be inclined to rent one there, especially as you really should take two in case the first one breaks. You can shoot all the ducks, doves and perdiz you want in South America with a 20 gauge and your shoulder will feel better and your arms won’t be as tired if you do. On trips that include pigeons, you might want a 12, as I have mentioned before.

You will shoot the outfitter’s ammo, and get a bill at the end. They’ll charge $12-$15 per box, and it adds up. Some packages include a certain amount of ammunition, some do not. This trip we shot local stuff, which, as far as I could tell, was called “Trust.” It did always go off, so I guess the name was apt.