Where would we be without scopes? I, for one, would not be shooting a hell of a lot, and only... 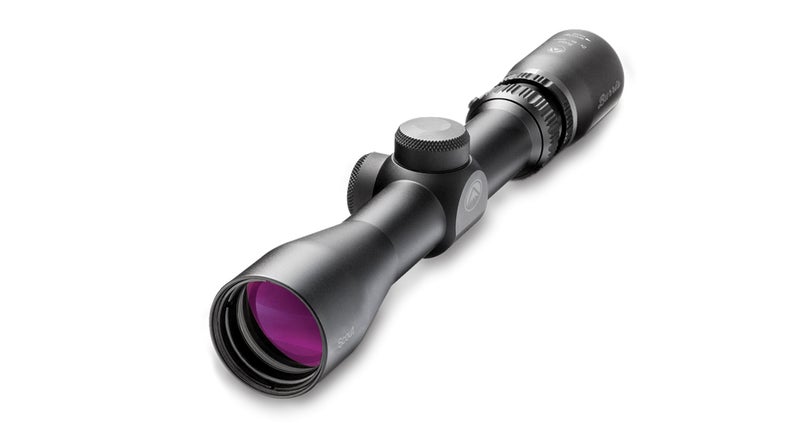 Where would we be without scopes? I, for one, would not be shooting a hell of a lot, and only shotguns at that. In any event, here are a couple of real good ones.

The brand-new Meopta ZD 6X-24X-56 is a straight-up sniper (oops, tactical) scope that offers every bell and whistle you could want. It’s designed for rifles chambered for the precise and pleasant 7.62mm NATO, the horrifying .338 Lapua, and the appalling .50 BMG.

The ZD has a 30mm tube and a 56mm objective, so it’s a big scope, but the tube is long enough so it’s easy to mount. The reticle is unusual. It’s a more or less standard mil dot whose center section illuminates, but the posts and the dots are outlined, not solid, so when you look through it, you get to see the whole world unobstructed. Along the lower quadrant is an unusual range-estimation device. It’s a series of small circles arranged at progressive heights from a baseline that roughly estimate the distance of a man measured by total height and head size at ranges from 300 meters to 1,000 meters. (Go to the Meopta website and look at their reticle-selection chart. How it works will be obvious at a glance.) I don’t think it will replace the laser rangefinder, but it’s a very good backup, or a super-quick way to get your distance without a rangefinder.

The clicks are definitive. I used the ZD on many days when it was bitter cold, and there’s no doubt about what you’re doing even when your fingers are frozen. All the numbers are big and easily readable, and the image is extremely bright and sharp. Instead of sending this scope back as I was supposed to, I kept mounting it on test rifles because it made the job so much easier.

There is no feature that makes sense on a tactical scope that Meopta has not included on the ZD. The list price is $2,069. The real world price is $1,800. That it sells for this kind of money is simply astonishing. For all intents and purposes, it’s a $3,500 scope.

As I complete my slide down the razorblade of life, I find that the softening of my brain due to age and recoil has, in fact, made that organ more permeable to new ideas than it once was—sort of like getting a sponge wet. For some reason, long ago, I decided that I didn’t like IER scopes, and said so on many occasions in ringing tones. I think the reason was their smaller field of view than a standard scope, or maybe simply because they were different, or maybe because I was full of it.

In any event, while conducting my massive and godless research project into the mysteries of the Scout Rifle, I found that I pretty much had to use an IER scope, and looked for one with more than 4Xs, because my geezer eyes need lots of Xs in order to shoot at targets properly. The one with the most Xs turned out to be the Burris 2X-7X-32mm Scout Scope, which is nice because I believe it was Don Burris who was the first to design and produce a scope dedicated to Scout Rifle use, and not simply slap the label on a handgun scope.

Chairman Jeff detested variable scopes and once administered a first-class ass-chewing to me for showing up at Gunsite with one, and I count that as one of the high points of my life. But the fact is that 2X-7X is one of the most useful power ranges around. For years it was about all I used.

This is a hell of a good little scope. The optics are terrific and the adjustments (all steel) are extremely accurate. (I mean really, seriously accurate, not just accurate for a scope that does not cost $4,500.)

I mounted it on a Ruger Gunsite Scout; the eye relief of 9.2–12 inches gets it out ahead of the breech, right where it’s supposed to be, and it works great with both eyes open, just as it’s supposed to. Weight is 13 ounces and length is 9.7 inches, so it’s small and unobtrusive. The reticle is Burris’s Ballistic Plex, which is extremely simple to use and will take you out to 500 yards, which would give Jeff Cooper a seizure, because he said that 300 yards was the practical limit for a Scout Rifle, and 400 yards and over was for nutcases.

The list price is $479, but the real-world cost is $100 less. Mount it with Leupold medium QRW quick-release rings. For a Picatinny rail or Weaver mount, these are the best I’ve used.

A Scout scope does take some getting used to, but I wish all shifts in attitude were this easy.