This started out as a report on the new 6.5-300 Weatherby cartridge and the Accumark rifle for which it’s chambered,... 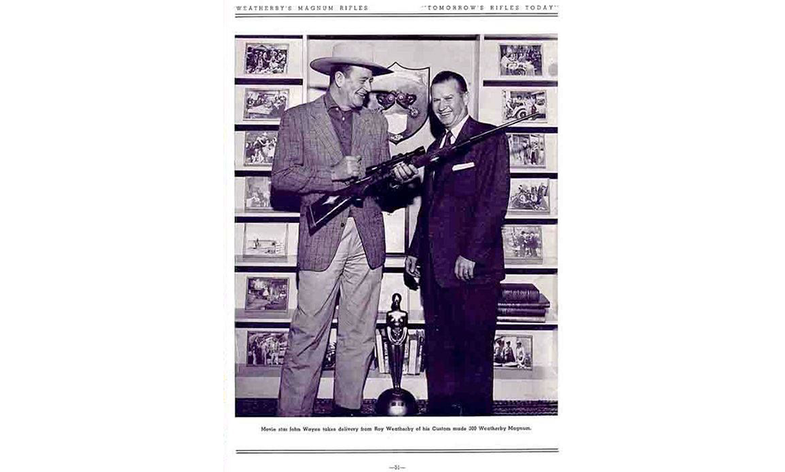 This started out as a report on the new 6.5-300 Weatherby cartridge and the Accumark rifle for which it’s chambered, but it morphed into something quite different. I’ve long had a soft spot in what passes for my heart for Weatherby, Inc., and want to pass along some of the reasons why. Let’s start with the man himself.

Roy Weatherby was the son of a Kansas sharecropper but was, in his heart, a Californian. Look at a Mark V rifle and you see pure 1950s California. It’s like a set of Moon hubcaps and a Hurst shifter on a chopped and channeled Chevy.

He was also a rabid big-game hunter and a gun nut of the first stripe. He absolutely loved all of it, and he passed that feeling on to the people who followed him.

I asked him once why he got into the business, and he said: “I wanted to build something special. I wanted to make guns that people would take pride in.” And he did. There’s a photo from the 1956 Weatherby catalog showing Roy presenting John Wayne with a brand-new full-fancy .300 Weatherby, built on a Mauser action because the Mark V was still a couple of years away. The Duke, who was a shooter offscreen as well as on, is clearly delighted.

But Weatherby once said that he got his greatest pleasure from ordinary folks who saved very hard to buy his rifles. He told of a plumber from Pennsylvania who was far from well to do, but who owned a Weatherby rifle in every caliber from the little .224 right up through the colon-clenching .460.

When he started his company in 1945, he took a hell of a chance. Both the shooting public and the shooting industry were ultra-conservative, and a radical-looking rifle and a line of super-powerful cartridges was swimming against the tsunami. On top of that, there had been no civilian guns built for four years, and the firearms manufacturers were selling everything they could make simply to catch up with the demand. And then there were surplus rifles beginning to flood in, which took a big chunk of the market.

So for Weatherby to come out what he did and sell it at high prices to boot was something that no modern business model would say had a prayer. But he made it work. Weatherby was a super salesman and a genius at the art of publicity, but in the end, it was the rifles that sold themselves. If what he made hadn’t delivered, the business would never have lasted.

Weatherby also had some very capable people working for him. Among those whom I remember are a designer named Fred Jennie who was largely responsible for the Mark V rifle, and Nils Hultgren, who was a master wood carver and could work wonders with contrasting ivory and ebony inlays and basketweave checkering. And there was Betty Noonan. Every successful organization must have a Betty Noonan. Betty joined Weatherby in 1952, and pretty much ran the place even if it was Roy’s name on the letterhead.

When Betty retired in 1989, after 35 years with Weatherby, the company decided to say a formal good-bye at that year’s NRA convention, and hired a hotel hospitality suite where people could say so long, and thanks. But there were so many people who thought so highly of Better Noonan that you couldn’t get in the room. The walls positively bulged, and there was a line outside reaching way down the hall.

In my formative years, when I was broke but every bit as greedy as I am now, Weatherby held a strange and terrible power over me and my wallet. I was beguiled by the power of the rifles, and I thought they were beautiful. Also, one of Warren Page’s two Main Guns was a .375 Weatherby with which he slew everything but smilodon. And since Warren ranked just above God in my estimation, that was a powerful influence. In 1966, I bought my first Weatherby at the then-list price of $275. It was a .300 with a lovely, honey-colored Claro walnut stock. I still have it.

It was the stocks that did me in. A great many of the Mark V handles were plain Claro walnut, but a great many were wildly gorgeous. When I saw one of these I would forget about trivialities like rent and food and gas and buy the gun. This went on for roughly 20 years. The longest I’ve ever driven in one day was 694 miles, and it was in order to to get my hands on a .257 Weatherby with a particularly sensuous stock before someone else did.

I’ve shot just about all the Weatherby cartridges, too. Here are my recollections:

.224 Weatherby Varmintmaster (now the .224 Weatherby Magnum). This was about like a .22/250, and the rifle chambered for it was a scaled-down Mark V with 6 locking lugs instead of 9. It was a lovely little rifle, and it broke my heart that they never made it left-handed.

.240 Weatherby. I never owned this one in a Weatherby rifle, but I did have one that I used for varmints, and loaded with 70-grain bullets at some kind of deranged velocity, it would do terrible things.

.257 Weatherby. Roy’s favorite, I understand. Screaming velocity. Loaded with 87-grain bullets and used on woodchucks, it was the definition of wretched excess. Loaded with 115- or 120-grain bullets, which carry, it’s a beanfield cartridge par excellence.

.270 Weatherby. I used one only a little. For the power it delivered, relatively mild recoil. I shot an antelope with one in a 50-mph crosswind and watched him simply dissolve into the ground.

7mm Weatherby. My personal vote for the best Weatherby cartridge. It will do 90 percent of what the .300 will do, and with far less recoil. I’ve shot a ton of game with a couple of them, and I believe the best load is a 160-grain Nosler Partition at about 3,000 fps. You can get that bullet going nearly 150 fps faster, but why?

.300 Weatherby. It has always been the Main Round of the series, and with reason. There’s nothing on earth that the .300 can’t kill; it excels at long range; and recoil is still manageable by most people. I’ve never used a bullet lighter than 180 grains, and eventually have come to prefer a 200-grain slug loaded to 2,950 fps.

.30/378 Weatherby. Originally developed for the military, this is the .300 in spades. It packs godless and rock-shivering power is exceedingly accurate at very long range, and is a big seller. There are a number of loads for it, but the best is 200-grain bullets at 3,160 fps. I’ve shot one, but never hunted with it, and can tell you that it’s for experienced riflemen only.

.340 Weatherby. Crushes stuff. The best load is 250 grains, and if you handload, try 275-grain Swift A-Frames. I’ve used several .340s, and used them a lot, and have seen nothing that they wouldn’t bash flat. If you can handle the recoil, it may be the best elk cartridge ever.

.375 Weatherby. This was Warren Page’s favorite dangerous-game round. It’s a blown-out .375 H&H that shoots 300-grain bullets at 2,800 fps. Warren detested recoil, and the .375 gave him the maximum amount of wallop with the minimum amount of kick. In 1960 Weatherby discontinued the .375 but the cartridge was so good that it refused to die, and in 2001 they brought it back.

.416 Weatherby. This one was designed by Ed Weatherby, Roy’s son, and was introduced in 1989. It uses 400-grain bullets, like the .416 Remington on which I dote, but pushes them at 2,700 fps rather than 2,400. I haven’t shot it, but Layne Simpson has used one on heavy African game and says he’s never seen anything like it. Layne also says don’t even dream about shooting it without the muzzle brake.

.460 Weatherby. Introduced in 1957, this was the most powerful commercial cartridge until Holland & Holland stunned the world with the .700 H&H in 1988. It’s 500 grains at 2,700 fps. I’ve shot one on several occasions, and do not intend to do so ever again. I hunted with a PH who used a .460 as a backup rifle and said it was the only round he’d ever used that would absolutely, positively, stop anything, instantly, under any conditions.

Two other Weatherby notes: Ed Weatherby took over the firm in 1988, and he is very much his own man, not an imitation of Roy. He also has a droll sense of humor. Once, when I was whining at him about why more Weatherby rifles were not made left-handed, he said if I would just shut up permanently on the subject, he would give me a rifle, and he was as good as his word. It was a left-hand AccuMark in .300, and it was a wonderful rifle. I was so impressed that I’ve kept my end of the bargain.

And: Two years ago, we had a brutal winter he-ah in Maine. Even lifelong Mainers were walking around with stunned expressions. In the middle of this, a package arrived from Weatherby, and in it was their wool hunting parka and pants with a note saying that if I wore these I might not freeze to death. I did, and I didn’t. It was a very gracious thing to do.