The most lethal sniper ever to practice that art is someone of whom you have never heard, has a name... 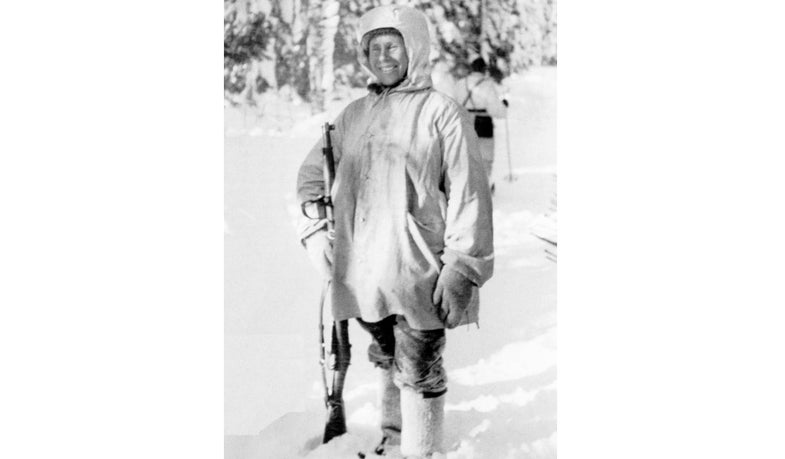 The most lethal sniper ever to practice that art is someone of whom you have never heard, has a name you probably cannot pronounce correctly, fought in a war you can’t identify, and has not yet had a movie made about him*. In the space of 10 months he racked up 505 confirmed kills and 705 unconfirmed. He stood only 5’ 3” tall. He refused to use a scope. He did, however, have a nickname, which is a must for all great snipers. He was called “White Death.” He earned it.

Simo Häyhä was a Finn who fought in the Winter War between Finland and the Soviet Union in 1939-1940. Born in 1905, he was a farmer and a hunter. And he was, like his countrymen, an exceedingly tough customer, used to brutal cold and snow, and at home on skis in the Finnish forests. When he turned 20, Häyhä enlisted in the Finnish militia, where he acquired a houseful of marksmanship trophies.

But Josef Vissarionovich Dzhugashvilli had other plans. Doing business under the name of Josef Stalin, the fun-loving Georgian feared a German invasion of his cold-weather port, Leningrad, using Finland as a staging area. So in 1939 Stalin invaded Finland.

He did it with a poorly-trained and equipped conscript army, many of whose senior officers had been murdered in a political purge two years previously. The Russians came in huge numbers, with tanks and artillery, but they wanted no part of Finland’s gloomy forests, and their surviving leaders were crippled by Bolshevik “reforms,” and saddled with political commissars who had no military knowledge but did have full power to interfere with military decisions. Because few of these Soviets could ski, they were confined to the roads, where they were easy targets.

They invaded during one of the coldest winters on record. The Finns had few men in uniform, no armor, hardly any artillery, and barely enough ammunition. Always outnumbered, they avoided pitched battles when they could and raided, and sniped. They made life as miserable for the Soviets as they could. They would drop a single mortar shell on a Soviet campfire, and leave the Russians to freeze the rest of the night. They would dig corpses that were frozen in grotesque positions out of the snow and plant them upright as warning signs for the living.

And men like Häyhä went to work. Now in the Finnish Army, in Infantry Regiment 34, he used a Finnish variant of the Mosin-Nagant rifle called the M28-30 (serial number 60974). It was shorter than the Russian version and fitted his small frame.

Häyhä had his own sniping technique. He relied on snow. He would dig a hole so he could shoot from the sitting position, which he favored, and pile a mound of hard-packed snow in front of it to give him concealment. He would even keep snow in his mouth to keep his breath from steaming. Häyhä would take shots up to 400 yards, but he refused a scope. Its lenses would fog in the bitter cold, and the mounts then in use forced a shooter to hold his head erect, presenting a bigger target.

The Soviets, who had their own roster of highly skilled snipers**, set out to get him, and on March 6, 1940, one did, hitting Hayya in the lower left jaw with an explosive bullet that tore half his face away. Before he lost consciousness, Häyhä managed to kill the man who had shot him, but he lost his rifle and never saw it again.

When he rejoined the world, terribly disfigured, the Winter War was over. Stalin, unlike Hitler, had been able to learn from his mistakes and sent in a fresh army that finally overwhelmed the Finns. But the Soviets paid a fearful price. As one of their officers put it, “We gained only enough ground to bury our dead.” There were a lot of those. Estimates of Soviet dead and missing vary wildly; they run from 49,000 to 170,000. The Finns lost 26,000. The wretched performance of the Soviet Army persuaded Der Adolf that an invasion of the Soviet Union was really a good idea after all.

When Häyhä recovered, he was a national hero. He was promoted to lieutenant, and returned to civilian life where he became a moose hunter and dog breeder. He died in a war veteran’s nursing home in 2002 at the age of 96. When asked how he became such a lethal shot, he answered “Practice.” When asked if he regretted killing so many men, he said, “I simply did my duty.”

**Of the ten deadliest snipers of World War II, nine are Russian. The tenth, at the top of the list, is Häyhä.