671 Pounds of Blue Marlin On A Gatorade Bottle

Here’s a cool snippet from the boys over at FishTrack.com. Just this past Tuesday, Captain Jeff Rogers, who runs the... 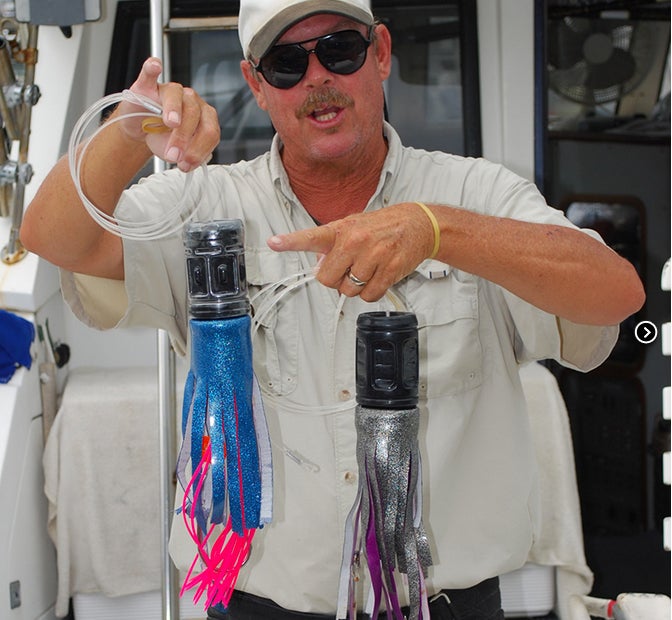 Here’s a cool snippet from the boys over at FishTrack.com. Just this past Tuesday, Captain Jeff Rogers, who runs the Aloha Kai out of Kona, tied his clients into a whopper of a blue marlin. Marlin are pretty common in Hawaii, but what made this 671 pounder special wasn’t the weight as much as what caught it. The fish ate one of Rogers’ giant “Gator” lures, which is nothing but a Gatorade bottle sporting a vinyl skirt. Now, lots of people fashion lures out of household wares, but what makes this basement job both comical and genius is the history behind giant marlin chuggers in Hawaii. A lure with an acrylic head the size of that Gatorade bottle can easily break the $200 mark. If it’s inlaid with mother of pearl, it will cost more. If it’s made by a legend like Joe Yee, well, sky’s almost the limit on price. In other words, everything from the boats, to the rods, to the reels, to the lures cost mucho dinero in the Hawaii marlin game. Catching a trout at the local crick on a spoon lure you made is pretty cool, but it’s not like buying a Dardevle would have set you back. Using Gatorade bottles to troll marlin in Hawaii is kind of an “in-your-face” to the bluewater crowd that insists on mother-of-pearls crafted by Joe Yee just because having a tackle locker full of them is a status symbol. In the end, the fish need only answer two questions: Does it look like food? Should I eat it?

From the story:
When Rogers deploys this lure, his parties are usually skeptical. But he reassures him that fish do hit it and the strikers are almost always marlin weighing 300 pounds or more. That’s why he always sets it out on the short-corner line — the big-fish spot in the pattern.

Jeff told them he’d had a really big fish on the same “lure” a few days before and lost it after a 20-minute fight. No worries. Replacements are easy to make with very inexpensive materials from your trash.

Within ten minutes of starting his troll along the current line, a 671-pound blue marlin crushed the Gatorade bottle, took the hooks and started a tail-walking run intended to empty the reel.

Have a great weekend, and get creative.