How To Never Miss A Bass On A Frog Again

One of the best things about being a bass fisherman is watching a frog get smashed in summer. Of course,... 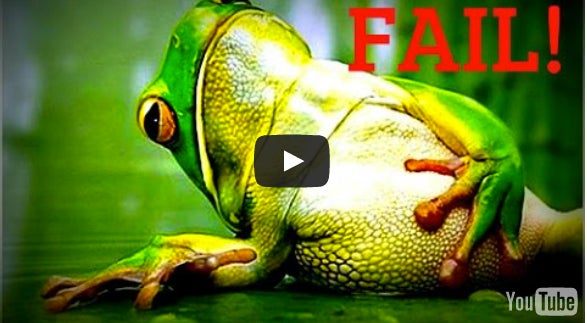 Rod angle is the most important part of frog presentation. Dave Wolak
SHARE

One of the best things about being a bass fisherman is watching a frog get smashed in summer. Of course, anyone that fishes a lot of frogs also know that it takes some skill, and you end up kissing a far amount of big fish goodbye throwing these lures. The worst part about it is that you see the whole thing happen. The best part about it? You see the whole thing happen. That means you should be learning from every miss, and logging what went wrong so it doesn’t happen next time. So let’s talk about some of the wrong, and see if I can help make it right.

Take a look at the video above from Bama Bass. First, I love this because these guys are not afraid to show their mistakes. But what I love most is that the angler is all about what I call “the bank cast,” which means actually casting onto the bank to create the effect of a frog jumping into the. What he does wrong is cast over some overhanging limbs. This is risky, and a big no-no quite often. I’ve found that it’s a high-percentage fish loss scenario when setting the hook over any kind of limb. It just jacks with the hook set angle and leverage. To compensate for this, one of the things I’ve learned to do is get the frog on the bank with a low-angle skip cast. It may not always be right on target, but when it hits the sweet spot, the odds are much better of getting a hooked fish out. I’ve also found that the end of a skip cast puts the rod tip in a better position to immediately sweep right back into a hook set.

To expand this idea a little further, it’s important to cast past optimal strike zones of all kinds when fishing frogs, then work the frog to the strike zone while positioning your body (and fishing rod) in the hook set-ready position as you approach the juice. Seems like an easy concept to grasp, but I still see too many anglers make the grave mistake of overhand casting the frog to land with a plop right on the hot spot, then keeping the rod tip high where they can’t deliver hook set power. This could be on a milfoil edge, a lilly pad edge, a shade line, beside a log, and even on the backside of a pontoon boat. It’s not necessarily that they get fewer bites, it’s that they’re not ready for them. One of the main keys is to give yourself at least three to five feet of working room. This will give you and Mr. Frog a few feet to make sure your cadence is in synch, nothing is fouled up on the cast or landing, and that your body is ready for the full force hook set. Also, before you even pull that frog into the water, make sure all the slack line is tight and your rod is in position as soon as the bait hits the water, because chance are, the strike will occur as soon as the frog touches a single molecule of H20.