The most common question I—or anyone in the business of educating the public about eating wild game—get is, “how do... 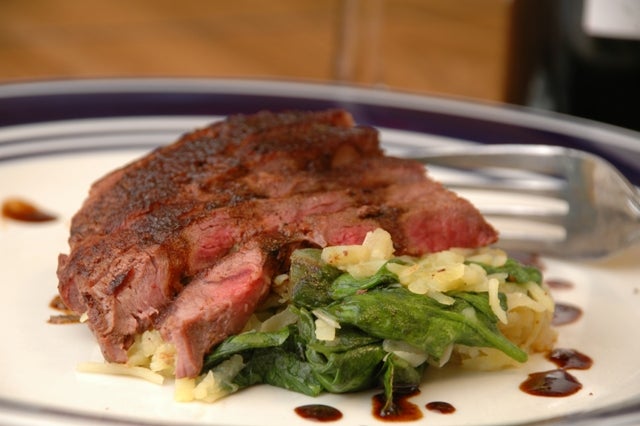 The most common question I—or anyone in the business of educating the public about eating wild game—get is, “how do I get the gamey taste out of my meat?” Scott Leysath, the Sporting Chef, has the best response: “Don’t put it in there in the first place.” To that I’ll add the following five reasons your game meat tastes gamey.

5. You Spent Too Much Time Taking Pictures
This plays off Phil Bourjaily’s reason No. 5 as to why you missed that turkey: Even before the shot, you start thinking about the picture you’re going to send your buddies. And after the shot, you spend another 20 minutes trying to get the perfect shot and come up with a good caption for your Facebook post. Then walk around with your phone in the air until you get enough bars to post it. All the while your animal is rotting away from the inside.

4. You Drove Around The Rest Of The Day Trying To Fill Your Buddy’s Tag
I’ve yet to understand why people think pronghorn aren’t edible. (Side note: I’ve found a large majority of the people who say that are just repeating second-hand information.) Antelope aren’t only edible, they’re delicious—although I will admit the animal itself does have a distinct smell. Antelope—which is my favorite game meat, by the way—is also the one that’s most susceptible to getting tainted. Antelope season typically falls from August through October, when air temperatures make it tough to cool a critter quickly. When you do kill an antelope, get it opened up as quickly possible and pull that hide. What you should not do is throw it in the back of the pickup and drive around the rest of the hot afternoon as your buddy sorts through speed goats trying to find one bigger than yours.

3. You Cut Off The Tarsal Glands
When I killed my first big-game animals 20 years ago, all the field-dressing information I could find said the first step was to cut off the buck’s tarsal glands. I learned pretty quick that’s not the first step, but the worst step. Why handle those stinky things at all and risk transferring that smell on to your meat. Since then I think we’ve had a renaissance in field-dressing, as almost no one I know bothers with the tarsal glands—or, that other unnecessary old-school field-dressing tip: cut the jugular to bleed out the animal.

2. You Held Out for a Trophy
Shooting a mature animal doesn’t always mean the meat is going to be gamey or tough. I’ve been lucky enough to tag a couple of trophy elk and both of them we’re pretty good. Not as good as younger animal, but still good and not gamey. I also shot a small bull moose that was tough as nails and a doe during the peak of the rut that stunk to high heaven. Still, odds are the older the animal, the greater the chances the meat will be less than ideal.

1. You Overcooked It
This is probably the No. 1 reason your game meat tastes gamey. Normally rational humans who would never think to order an expensive rib-eye in a steakhouse anywhere past medium-rare (okay, medium), turn their precious butterflied backstrap steaks into charred, gray wafers then complain about them being tough and livery. Let me tell you, again, what any good game cook knows, whether he’s grilling venison steaks or roasting a whole duck: Don’t cook it past medium-rare. It won’t kill you. I promise. And you’ll discover that game meat doesn’t taste gamey at all.