A New Way to Cut a Duck

When butchering fowl, there is a cut called the airline breast, which leaves the first section of the wing, or... 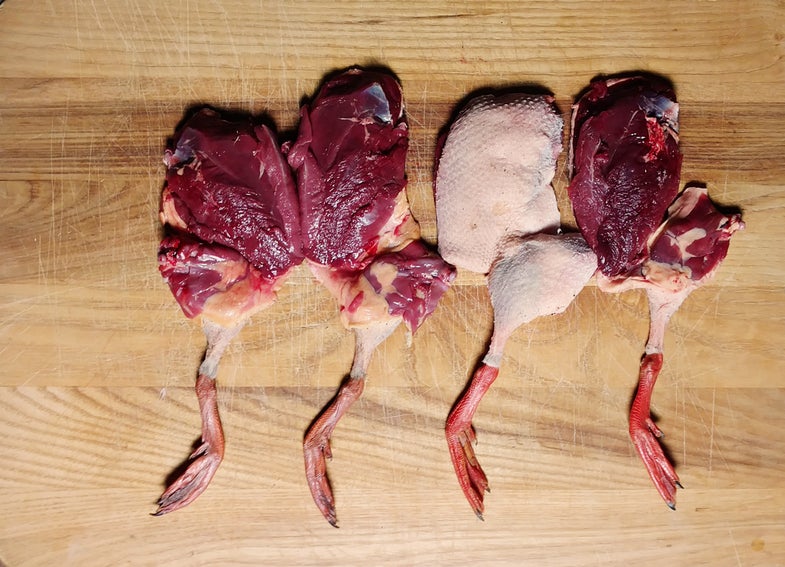 When butchering fowl, there is a cut called the airline breast, which leaves the first section of the wing, or the drumette, attached to the boneless breast meat. It not only looks cool, but it also gives diners an extra bite or two of meat, provided the bird had a fat wing in the first place. Well, a duck is not a chicken and their wings typically don’t give up a lot of meat. (Plus, they’re a pain to pluck.) A mallard’s legs, however, do, and it doesn’t take but an extra minute or so to pull the feathers off them. My buddy Brian showed me this technique awhile back and I’ve used it ever since. (Note: I left the feet on for the photos, but you should remove them before cooking.)

1. Pluck the breast and the legs. You’ll have to pull the feathers part way to the back of the bird and down near the vent.

2. Remove the foot by cutting around the joint where the skin meets feathers. You should feel the joint pop when you cut just at the knee. Twist the foot and cut away any ligaments to remove it.

3. With a sharp knife, make an incision down one side of the keel bone. Be careful to stay close to the bone to remove the inner tenderloin underneath.

4. At the front of the breast, make an angled cut down the wishbone toward the wing.

5. Working from the front, carefully pull the breast meat with your fingers as you cut it away from the ribs. Use the tip of the knife to cut between the breast and the wing.

6. With your knife held close to the duck’s body, slice through the skin back toward the leg.

7. Press down on the duck’s thigh, separating it away from the body. With very little pressure, the ball joint should pop out of the socket. Cut between the ball and the socket.

8. Slice through the skin from the front of the breast to the thigh. Done carefully, this should leave the thigh and leg attached to the breast with a small piece of skin.

9. Repeat with the opposite breast and leg portion.