Although I still have a hard time understanding it, the market for high-dollar coolers continues to chug along. It seems... 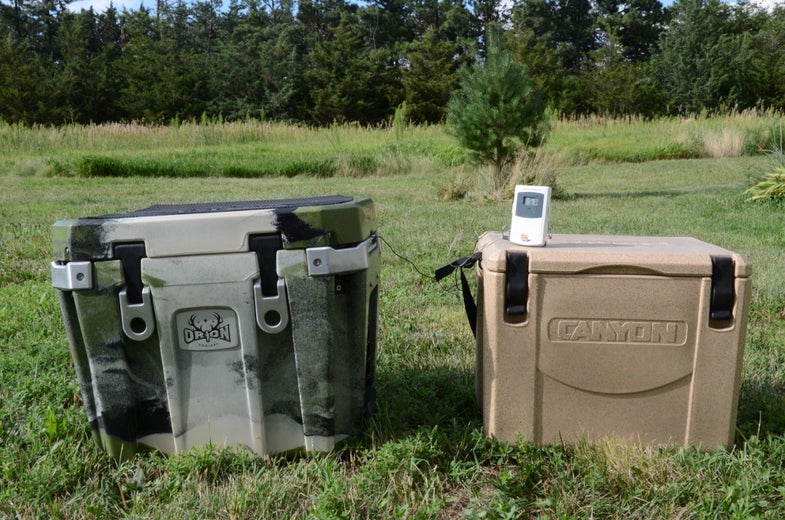 Although I still have a hard time understanding it, the market for high-dollar coolers continues to chug along. It seems like every day I get a press release about another company diving in with a new and improved version. But are they worth it? Well, I have several and use them often, but honestly I can’t tell you if they’re worth the hype. It’s up to you to determine how to spend your money. I just provide the facts, as is the case with this test of two premium coolers that I would put in the “12-pack” category.

Orion 25
Made by Jackson Kayaks, which knows a thing or two about rotomolding, the Orion 25 is feature heavy, with a half-dozen tie-down points and four bottle openers (my favorite feature). Cam-style latches are heavy-duty and easy to use. Proprietary YakAttack strips along the sides accommodate a host of RAM-style accessories, including rod and electronics holders. The removable ABS plastic tray takes up a lot of interior space, but does include a nifty Princeton Tec flashlight for illuminating the interior for after-dark drink retrieval. While cool, the rubber standing pad started to peel back after the first day in the hot sun. The rest of the cooler I would expect to be bombproof. It’s that well built.

Canyon Outfitter 22
Of all my personal-size coolers, which include those from Yeti, Orion, Igloo, and others, this is the one I like, and use, the most. While durable, it’s not heavy or overbuilt and the compact size fits where most other 20-quart-class coolers don’t. Plus, the handy shoulder strap makes toting easy while leaving hands free for other stuff, like a cold beer. It has about half the insulation of the Orion, which attributes to the wide temperature differences, but it’s also less than half the price. Full-length rubber skid plates on the bottom keep the cooler in place.

Determining Capacity: Nearly all coolers are classed by their size as it relates to volume, but how that is determined differs from manufacturer to manufacturer. To determine true volume in quarts, I added up the interior dimensions and divided the number by 58.

The Test: Cooler companies recommend pre-chilling the cooler, but I wanted this be closer to a real-world test. Most of us fill our coolers with food and drinks, pour ice over everything and go afield, so that’s what I did. I put a six-pack (cans) of cold beer in each cooler—PBR for the Orion and Coors for the Canyon—and set the coolers next to each on the south-facing side of my garage. Each cooler was topped with 20 pounds of ice. I duct-taped a temperature probe to the interior lid of each and ran the cable to the display outside. I opened the cooler each morning and, after recording the internal temperature, opened them again in the afternoon and removed a beer from each. The beer was temped with a digital thermometer and temperature recorded, along with the daily high temperature. Here are the results:

Remarks: While I’m not surprised the Orion outperformed the Canyon—it has double the insulation after all—I expected the Canyon to hold ice longer. It had melted by the third afternoon, while the Orion’s ice lasted until day four. The fluctuating interior temperatures can be explained by the lids, which were baking in the sun, transferring heat to the temperature probe. The Orion’s lid was black rubber, while the Canyon a light tan. That probably explains the Orion’s jump on the hot, second afternoon, before dropping a few degrees in relation to the outside temperatures.