I’ve long used plastic juice or milk bottle filled with water and frozen to keep the contents of my cooler... 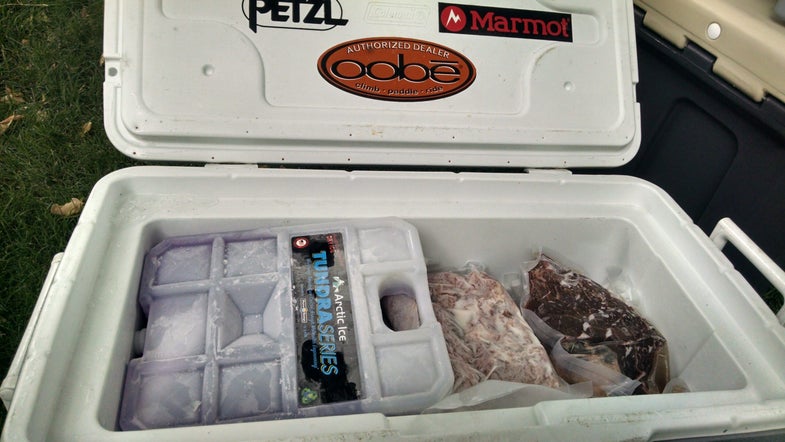 I’ve long used plastic juice or milk bottle filled with water and frozen to keep the contents of my cooler cold on hunting or fishing trips. These solid blocks of ice not only melt a lot slower than a bag of cubed ice, but also contain the melted water so you don’t end up with a soggy sandwich or several inches of bloody water breeding bacteria in the bottom of the cooler. I’ve found these work even better than those blue gel packs, because they stay frozen longer and, most importantly, don’t leak some petroleum-based goo all over my food and beer.

Earlier this summer I was sent a new style of cooler inserts to try, made by a company called Arctic Ice. Instead of petroleum goo, Arctic Ice inserts are filled with a biodegradable, plant-based phase-change material (PCM). I barely passed physics (and biology for that matter), but from what I gather, a PCM has the ability to store or release energy, often in the form of heat. According to the company’s press materials: “When Arctic Ice approaches its melting point (that’s the phase change) it begins absorbing more heat while stubbornly refusing to warm up. It holds a constant, pre-defined temperature (34ºF or 5ºF) until the entire cooler pack finally thaws.”

That “34°F or 5°F” refers to the two models of Arctic Ice available—Alaskan and Tundra. The latter doesn’t freeze solid until it reaches 5° Fahrenheit, when it turns from purple to white. These are great for when you want to keep meat or fish frozen during transport. The biggest challenge with the Tundra Series is finding a freezer capable of getting down to such a low temperature. Arctic Ice suggests re-freezing Tundra inserts for at least 36 hours at the lowest setting available on consumer freezers.

The Alaskan Series freezes at 34°F, making them ideal for keeping food and beverages cold for long periods. According to the company, Alaskan Series inserts last more than 60 percent longer than regular ice and up to three times longer than blue gel packs. I used these all summer and was impressed with their ability to maintain an extremely cold temperature, even after the PCM had turned from solid to liquid. I found it took about 8 to 10 hours to re-freeze them in my 1940s era International Harvester deep freeze.

Both models feature a rugged shell of durable, recycled plastic that shouldn’t leak under normal conditions. I know mine took some beatings in the back of the truck, but never failed. They’re also dishwasher safe.