For years I resisted the pellet-grill trend. No matter how hard my Traeger-loving buddies pushed, I always asserted that pellet... 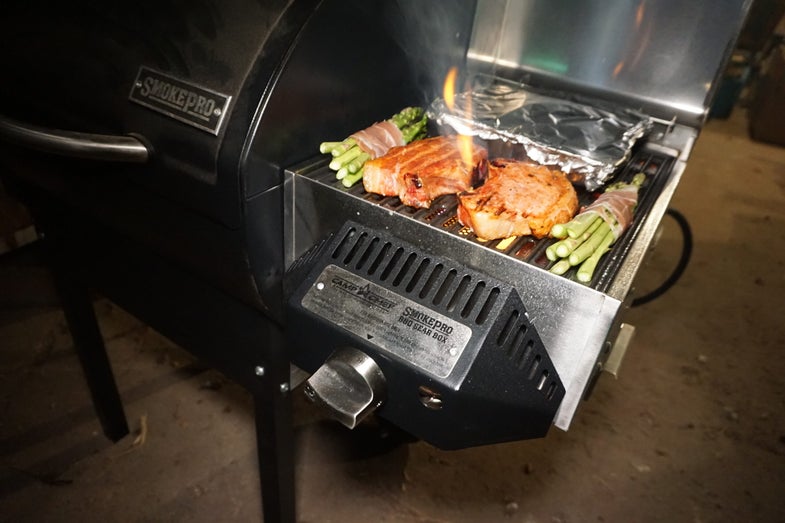 For years I resisted the pellet-grill trend. No matter how hard my Traeger-loving buddies pushed, I always asserted that pellet grills weren’t grills at all. They were, and are, automatic smokers that just didn’t have the ability to get hot enough to do anything I would call grilling. Do pellet grills turn out good, smoked food? Yes, but it was missing that delicious texture and flavor only a kiss from fire can provide.

That has changed with Camp Chef’s new BBQ Sear Box. Designed to hang on the side of the company’s Smoke Pro line of pellet grills, it adds a ripping hot 16,000-BTU propane burner topped with 184 square inches of cast-iron grill space. That’s not huge, but it is enough room to sear off several elk steaks (or as the picture shows a couple of pork chops and a pan full of potatoes) after putting the smoke to them on the pellet grill.

Reverse searing—cooking a steak in the oven before finishing it on the grill—is all the rage right now, and for good reason. It’s an almost foolproof way to create the perfect piece of meat—one that’s cooked to the exact temperature in the middle with a rich flavor of a seared crust. Doing the same thing in a smoker and finishing on a grill only amps up the end product with delicious smoke-tinged tones.

Admittedly, the BBQ Sear Box isn’t for everybody. But I see two distinct audiences for the accessory. The first is the guy who’s serious about smoking and wants to add that next level to his outdoor cooking game. For that grill master, the Sear Box really is a game changer.

The other is the homeowner (or renter) who doesn’t have a lot of deck or storage space, yet still wants the ability to both grill and smoke. A Camp Chef Smoke Pro with a BBQ Sear Box attached takes up about as much space as a regular, chain-store grill, but delivers complete versatility for smoking, grilling, or both.