I’m a sucker for heritage brands, so when the team from PK Grills reached out to me to test one... 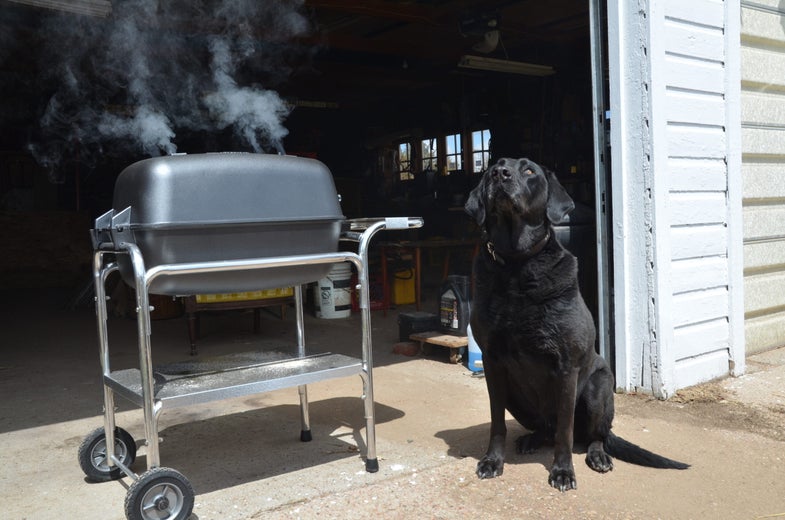 I’m a sucker for heritage brands, so when the team from PK Grills reached out to me to test one of their charcoal-fired Portable Kitchen Grills, I was all in. If you’re of Generation X or before, you probably recognize the PK Grill from your grandfather’s backyard, especially if your grandparents lived in the south-central U.S. Originally sold from the mid-1950s to the 1970s, the Portable Kitchen was extremely popular in that region during the Golden Age of Grilling. In the late ’90s, the PK brand was purchased by Paul James of Little Rock, Ark., and the Portable Kitchen was back on the market.

My first thought upon assembling the PK Grill was, Why is it so short? From ground to grate, the grill measures just 28 inches. Then I put a tape to my Weber kettle and got the same measurement. I quickly realized that because the PK’s grill box resembles those found on modern propane grills, which stand much higher, I was mentally comparing it to those. In truth, most charcoal grills are of a similar height to the PK. My Lab, Aengus, is long in the leg (and getting there in the tooth as well), but maybe the photo will give you an idea of how high the PK stands.

My second impressions was, Holy cow. This thing is well built. That grill box is thick cast aluminum, and I imagine, with some care, it will outlast the original owner. It’s heavy and sits solidly in the aluminum tubing cart. The grate is of heavy-gauge nickel-plated steel and, with proper seasoning, won’t rust anytime soon. Altogether, I’d say the PK Grill is well worth the $370 retail price, though I do think there is some “hipster factor” built into that cost. It’s also made in Little Rock, giving you the satisfaction of paying for made in the U.S.A.

The rounded square shape of the PK Grill offers up a little more than 300 inches of grilling space—more than enough for a couple of big rib eyes, some vegetable, and potatoes. Or about a dozen ¼-pound burgers with a few hot dogs thrown in for the kids. That’s also plenty of space for a two-zone fire for grilling and smoking. In fact, after putting it to some good use for the past month, I think the design, with its four dampers (two up, two down) and heavy lid that seals tight, makes it a better smoker than the Weber kettle. (As a dedicated Weber man, it was really tough for me to come to terms with this.) The cast aluminum holds an even heat very well and the fire is also easily tended thanks to a hinge in the center of the grate.

One thing that is missing from the PK is an ash catcher. As it is now, all the ashes and any runoff fat or other liquids makes a huge mess on the lower shelf. I don’t think it would take much to fit in a shallow tray hanging just below the bottom of the grill box to solve that problem, but in the meantime, it’s up to the owner to figure out an alternative (such as disposable foil pan) or resign themselves to scrubbing the shelf after every grill.