How to Scale Panfish

Don’t tell my editors, but I snuck away last week and did a little fishing—even though I was past deadline... 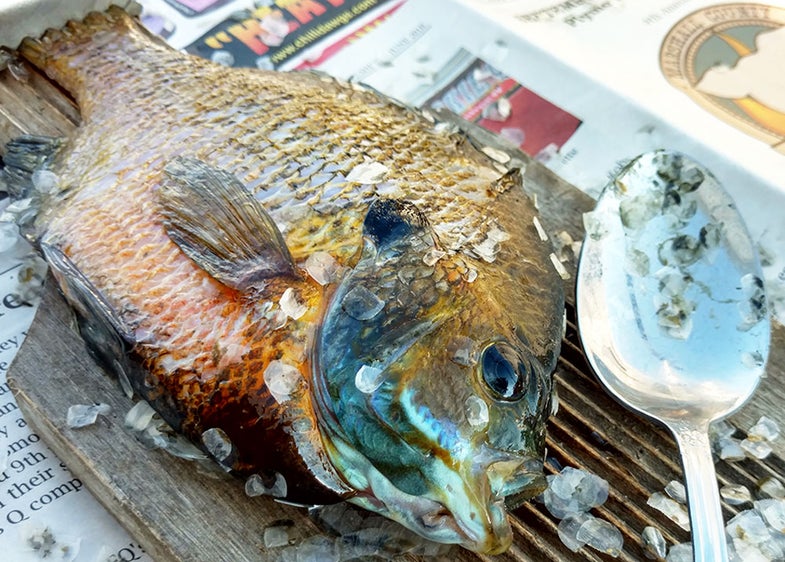 Don’t tell my editors, but I snuck away last week and did a little fishing—even though I was past deadline on a few stories. No matter how hard I tried to focus, reports of high water and hot fishing couldn’t be ignored. Sure enough, the bluegills were just getting ready to bed, and I managed to put some big panfish in the kayak. Normally, I fillet all of my fish, but when it came time to clean these, I decided to scale a few and cook them whole. This technique is kind of an anachronism today, as not a lot of people do it, especially here in the northern tier of the U.S.

Here’s how I clean them:

1. First, set up your cleaning station with plenty of newspaper. Panfish are slimy, so I also use a cleaning board with a clamp on the end. It definitely makes things easier and simplifies cleanup.

2. There are a number of devices on the market for scaling fish, but I’ve found a simple soup spoon works best. It peels the scales off easily, and the curvature of the spoon deflects them away from your face. It’s all fun and games until someone gets a scale in the eye.

**4. ** Hold the fish firmly by the tail (that’s where the clamp comes in) and slide the edge of the spoon along the side of the fish from back to front. Get the edge under the first row of scales, and the others pop off quickly as you scrape towards the head. Repeat on the second side. Once you’ve got it down, you should be able to scale an eight to 10-inch bluegill in 30 seconds or less.

5. Now it’s time to remove the guts and the head. Using a sharp fillet knife, make a slit along the belly from between the pectoral fins to the vent. To cut off the head, lay the fish on its side and press the edge of the knife through the body just behind the gill plate. As the head comes off, it should pull most of the entrails out with it. Use the spoon to clean the body cavity well and rinse the entire fish with cold running water.

6. That’s all there is to it. Once you’ve got a pile of them cleaned, the whole, scaled panfish can be cooked on the grill, smoked, or, best of all, fried in a skillet of sizzling hot lard.