Opinel: One Good Knife at a Great Bargain

If you’re anything like me, your pocketknife often gets tasked for slicing food, if not in the kitchen, then in... 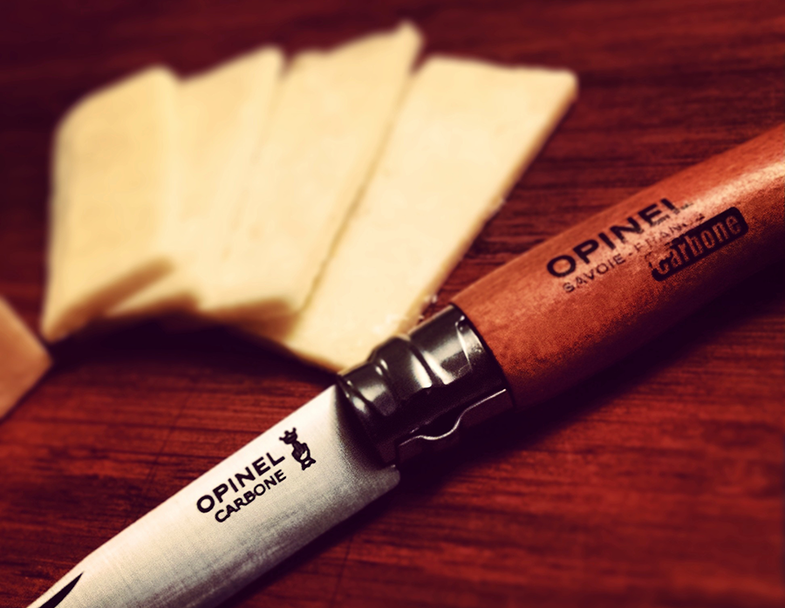 If you’re anything like me, your pocketknife often gets tasked for slicing food, if not in the kitchen, then in the field. For the past several seasons I’ve been carrying a Steve Hornady Signature Buck Vantage. I like it and have used it well, and, while the 420HC steel blade takes and maintains an edge okay, I just can’t get it razor sharp like I’d prefer. That and it’s a little heavy with a thick blade, which is fine for tough jobs. I was looking to start carrying something a little more classic, at least for everyday carry. I must be getting old, but tactical, door-piercing tanto-bladed stickers don’t appeal to me anymore (or really never did).

Recently, I’ve been alternating between carrying a Schrade Old Timer and a Remington Stockman. Both are good knives and have served their purpose, but I miss having a blade that locks. And both were a little heavy in the bottom of the pocket, especially after being used to a clip knife. After some research and recommendations from friends, I found the Opinel.

A classic peasant knife, the Opinel has a single clip point blade made of carbon steel. (Stainless versions are also available.) Out of the box, my No. 7 was incredibly sharp, but what most impressed me was how light it is. Weighed on my digital kitchen scale, it comes in right at 1 ¼ ounces. In the hand and pocket, it’s like it’s not ever there. It measures 4 inches closed, with a 3 3/16-inch blade.

A little bit about that blade. As I mentioned, I opted for the carbon steel, which is already showing some fingerprints after just a few days of carrying it. The carbon is going to take some upkeep, which I’m admittedly not very good at. I’m going to have to remember to oil it occasionally, but I’m okay with that trade-off for the high-carbon’s strength and ability to take a very keen edge. The blade is thin, so don’t use an Opinel for prying (or punching through those car doors), but for slicing sausage, butterflying backstraps or breasting out birds for a quick and easy blind breakfast, the Opinel will do just fine.

What’s unique about the Opinel is the collar lock, an original design that hasn’t been improved upon since Joseph Opinel invented it back in 1890. Once the blade is deployed, simply twist the collar to lock it in place. The blade locks closed via the same method. It’s ingenious, really, and is one of just two moving parts on the whole knife—the other being the single pivot pin.

The handle is beech, and thanks to a minor palm swell and flared heel, it’s comfortable in the hand. The No. 7 is just a tad small for my paws, which is probably why the No. 8 is the company’s most popular size. Some folks complain the blade can be hard to open via the thumb nick when the handle swells in wet or humid weather, so Opinel suggests employing the coup du Savoyard. This trick entails bumping the heel against a table or other hard surface, which pops the blade out enough to pull it open easily and makes you look really cool.

Now, I think we’ve established that I’m frugal, at least when it comes to spending money on something other than food. So, when I saw the price tag of the Opinel—a whopping $13—I couldn’t click the order button fast enough. That’s right. For about fifteen bucks when you add in the shipping, you can get a great pocketknife—one of the best I’ve come across. I’ve seen some hipster joints try to pass these off for $20 or more, which is still a steal, but don’t buy it. Go right to the Opinel USA website and order one. Or several. I know I’m already planning on buying a couple more sizes.