One of my favorite local lakes is overrun with small northern pike, so much so that if you cast any... 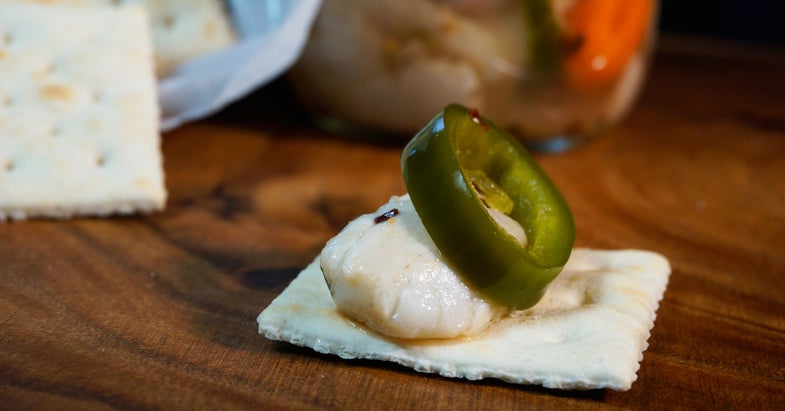 This salt-and-vinegar brine can dissolve pesky Y-bones in as few as three days.. David Draper
SHARE

One of my favorite local lakes is overrun with small northern pike, so much so that if you cast any lure with a bit of flash, you’re likely to lose it to one of the toothy predators. Mostly you just hook into hammer-handles, but spend a day on the lake and you’re almost guaranteed to land some eater-size pike, too—those in the 2- to 5-pound range. I know a lot of folks don’t care to mess with pike because of the dreaded Y-bones, but I use the five-fillet technique and don’t have a problem.

One of my favorite ways to enjoy northern pike is pickled, which also eliminates the pain of swallowing a Y-bone, by way of dissolving them in a heavy salt-and-vinegar brine. I brine my pike for about a day, but if you suspect your fillets have a lot of bones, leave the meat in the brine for three days. (Many recipes call for a week-long brine, but I haven’t found that length of time necessary.) Also, this is a cold-pack recipe, meaning you’ll have to keep the pickled pike refrigerated. If you’re an experienced canner, there’s no reason you couldn’t hot pack them and process the sealed jars accordingly.

Directions
1. Cut pike fillets into bite-size chunks and pack into a quart-size glass jar. Cover with kosher salt and fill with white vinegar. Cover tightly and shake to dissolve salt. Refrigerate for 24–72 hours; shake every eight hours or so. After brining, pour the contents of the jars into a colander to drain well.

2. In a small pot, combine 2 cups white vinegar, 1 cup sugar, and 1 tablespoon of pickling spices. Heat over medium, stirring until sugar is dissolved. Remove from heat and allow the pickling liquid to cool.

3. Layer pike, carrot coins, sliced onion, and jalapeños into a quart glass jar (or two pints jars). Pour cooled pickling liquid over everything until the jar is filled and its contents are completely covered. Seal tightly and refrigerate. The pickled pike should be ready in three days to a week.