Smoked pheasant is great, but sometimes I’m at a loss as how to eat it, other than as a snack... 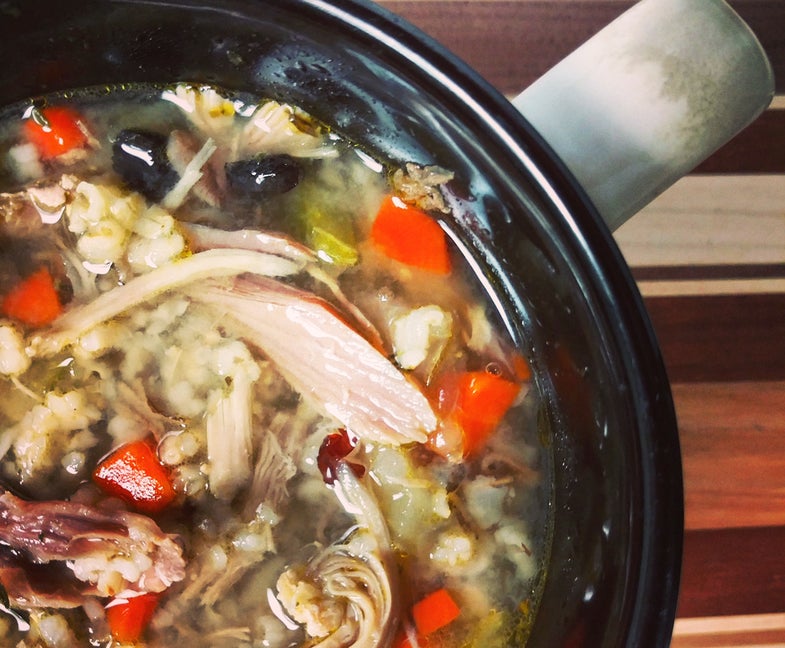 Smoked pheasant is great, but sometimes I’m at a loss as how to eat it, other than as a snack or in a cheeseball. Sure, I could throw it in a salad, but that’d be way too healthy. Instead, I worked up a soup recipe. Actually, it’s pretty healthy, too, if you overlook the bacon grease. You could use olive oil instead, I suppose, but the grease just adds another level of smokiness to the package. If I were you, I’d substitute a bit of water for stock and sprinkle in Knorr’s Chicken Bouillon. A half-teaspoon or so gives the flavor a nice punch, but my girlfriend, T. Rebel, doesn’t care for the MSG, so I have to leave it out.

Directions
1. Prepare the wild rice according to the directions on the package. Cut and shred the meat from the smoked pheasant to get about 2 to 2 ½ cups of meat.

2. Melt the bacon grease in a Dutch oven or large pot set over medium-high heat. Use a box grater to mince the onion into the simmering grease. Add the carrots and celery then stir. Sauté the aromatics for three minutes, then strip the leaves from the thyme stems and add the leaves to the pot, along with a teaspoon of salt and black pepper to taste. Stir.

3. Add the shredded pheasant and wild rice to the pot, then cover with the stock. Lower the heat to barely a simmer and let cook for 30 minutes.