Seven Tips for Traveling with Meat

Though it may not look like it, what you see in this photo is about 200 pounds of elk meat,... 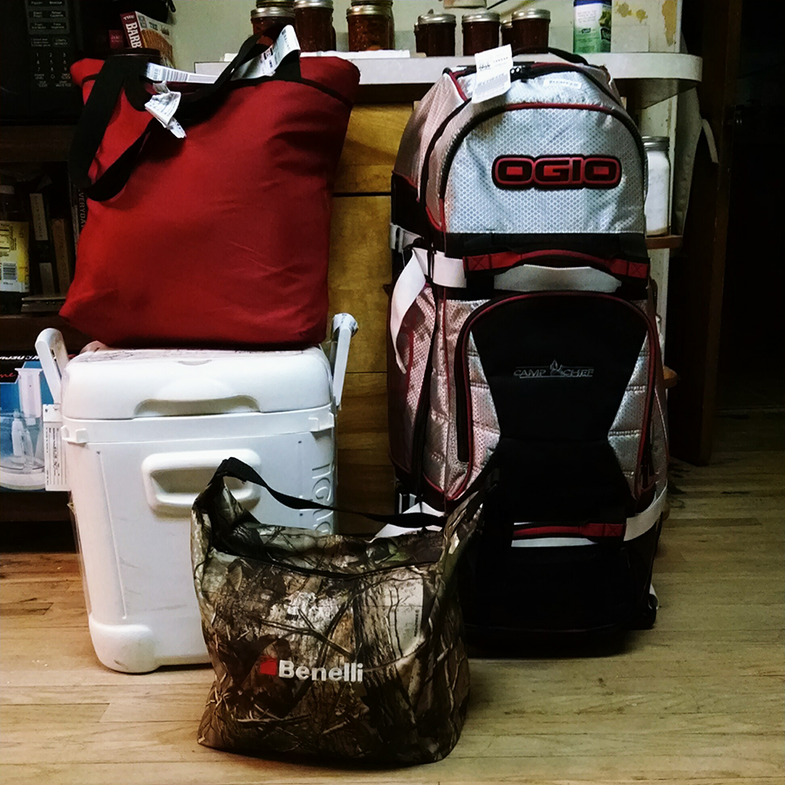 Though it may not look like it, what you see in this photo is about 200 pounds of elk meat, fresh off a United flight from Portland to Denver. Whenever possible, I try to drive to any big-game hunt, mostly to ease the trouble and cost of getting everything, including meat and antlers, home. Unfortunately, my schedule this time didn’t allow it, and I was forced to fly to Oregon, then catch a ride with a friend to Opal Butte Outfitters near Heppner. Lucky for me, Opal Butte had a walk-in cooler where I could hang my bull for a few days before processing it, and a couple of freezers with room for my cut-and-wrapped meat. From there, I followed these tips for ensuring I got all of my meat on the plane ride home.

Bone It Out: It’s no secret that my favorite cut is bone-in venison shanks, but when flying, every ounce counts. So everything—including all four shanks—got boned out.

Don’t Spare the Knife: Trim judiciously, but with an eye toward saving as much weight as possible. Any piece of fat, sinew, or silverskin that’s going to get trimmed before it goes in the pan should get cut on the table first. Just like boning meat, there’s no sense paying overweight charges flying scraps home.

Find Freezer Space: The night before your flight, or even earlier, find a freezer to borrow. Your meat needs to be frozen solid when you get on the plane. I had to overnight in Portland, so I enlisted the help of a friend who works at Danner where they have a freezer for employee use. I was ready to call in other favors as well. Ask nicely at the hotel and you may be able to store fish or game in the restaurant’s freezer. In Kodiak, Alaska, the Best Western has a big walk-in reserved for guests coming out of the bush with boxes of fish and game. It may cost you a few cuts of meat as payment, but it’s surprising how many people are willing to help hunters store meat.

Pack Meat, Ship Gear: Shipping meat is expensive because it needs to be expedited to ensure it doesn’t thaw. Gear and clothing, on the other hand, can take the cheaper, slow boat home. I emptied my rolling bag of everything except my shaving kit, filling all that empty space with frozen meat. My bow and a box of clothes were shipped via UPS for far cheaper than what United would charge for extra bags.

Improvise Insulation: If you don’t have a cooler, but still want to bring a few cuts of meat or some frozen birds home, wrap them in thick clothing. This layer of insulation actually often works better than a thin, collapsible cooler.

Carry On a Cooler: I checked one hard-sided cooler, one soft-sided cooler and my roller bag of meat—each one weighed half a pound less than the allowed 50 lbs.—on the plane at a total cost of $185. If any of those bags had been overweight it would have been an extra $100 per bag. So, I had another soft-sided cooler with me that I filled with any extra meat. Most airlines allow one carry-on and one personal bag. My backpack of optics was the latter, my soft-sided cooler with 50 lbs. of meat the former.

Fly Direct: During long layovers, meat can sit on a hot tarmac for hours, but as long as it’s in a cargo hold under the plane at altitude, meat will generally stay frozen for all but the longest of domestic flights. I checked my bags at 1:00 p.m. and got home at 10:30. (I live about three hours drive from Denver.) After nine and a half hours, my meat was still rock solid.