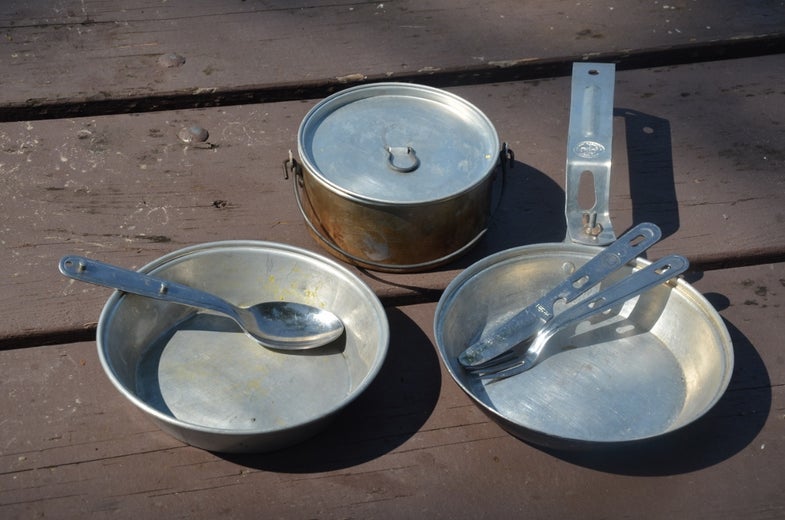 For a brief period in the early 1980s, I was a Boy Scout—Longs Peak Council, Troop 90, if I remember correctly. I don’t think I made it past Tenderfoot before the discovery of girls and beer led me far astray, though I do still try to ascribe to the Scout slogan: Do A Good Turn Daily. I also try to go afield well prepared, which is probably why I have packed my original Boy Scout Mess Kit on just about every camping trip I’ve ever been on.

The funny thing is, I own better, newer cookware—modern, non-stick stuff that works way better than the cheap aluminum the mess kit is made from. Still, the mess kit has a special place in my chuck box. The skillet with the folding handle isn’t that great for cooking, but it does make a handy pan for holding prepped ingredients. Same goes for the plate, which I eat from more often than any of the larger enamelware plates in my chuck box. The billy can, while small, gets put on the campstove after every dinner to heat dish water. I even still have the plastic measuring cup which I use for, well, measuring. Other than collapsible cup and cheap nylon cover, my Boy Scout Mess Kit is complete. I even have the nesting knife, fork and spoon combo.

The only thing missing from those Scout days that I wish I still had, other than my innocence, is the ivory-handled Scout Camp Knife, which was either lost or, more likely, taken away from me for carving my initials somewhere I shouldn’t have been.

Sometimes I think I probably should have continued on with the Scouts and not, as my mom put it, fell in with the bad crowd. I might have become a better citizen, but when I look at where I am in life and some of the adventures I’ve been (illicit and otherwise), it’s hard to have any regrets. I don’t plan on parting with my Boy Scout Mess Kit anytime soon, and, on my honor, will do my best to do my duty, to help other people, and to keep myself physically strong and mentally awake. And yes, Mom, I’ll even work on being morally straight.