A Cut Above the Rest: Butchering Your Own Deer

Illustration by Luke Nilsson I removed the tenderloins when I field dressed the doe. These are the deer’s filets mignons—slender,... 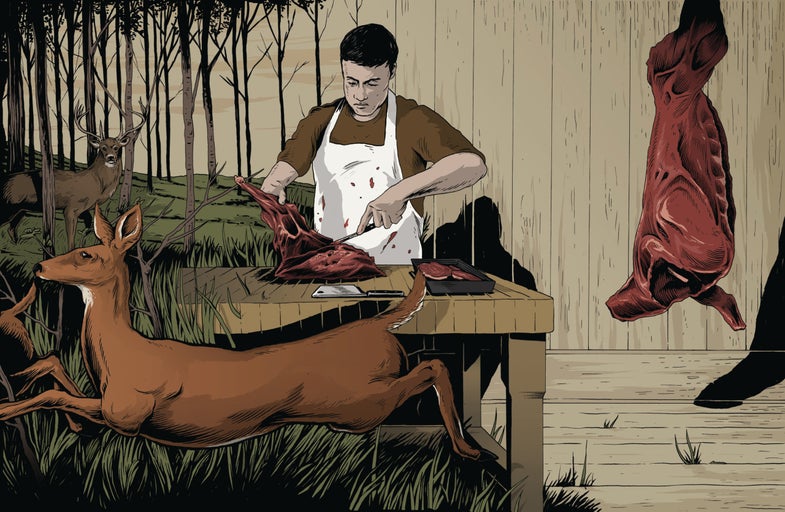 I removed the tenderloins when I field dressed the doe. These are the deer’s filets mignons—slender, butter-tender cuts that don’t need to age—and I like to grill them as soon as possible after pulling the trigger. To savor a meal when my boots are still muddy from the drag out of the woods and the tinge of entrails lingers on my hands is my doxology for the hunt, for the deer, for the blessing of both.

That was five days ago. Now the doe hangs from my deck like a tawny chrysalis, hindquarters spread by the gambrel, head in a bucket. The butchering table is clean, the knives are sharpened, and pans for meat and scraps are ready. My first cup of coffee is half empty. I’ll need four hours to render this doe into vacuum-packed parcels stacked in the freezer. Both dogs are at my feet, licking their lips. It’s a happy day for them, too.

Belly Up to the Butcher Block
I butcher my own deer because I like the end product: finely trimmed boneless cuts that I instantly recognize months down the road. I never wonder if venison from my deer is mixed with that of other hunters. I never question my meat’s cleanliness, or worry that it will be freezer-burned and soured from improper cooling, handling, and packaging. And I’ve come to believe that those last hours with a knife and grinder are something of a sacrament, closing the circle of a hunter’s self-sufficiency. I’ve had a hand in every part of the process, from oak flat to table. There’s a lot of satisfaction in that.

Pride in my butchering skills took time to develop. Early on, I was daunted when faced with a whole hindquarter. I didn’t grow up in a deer hunting family, so my first year or two of home butchering involved a fair serving of trial and error. If it took me a few seasons’ worth of oddly shaped roasts, fine. Even those hacked-up meals were delicious.

To begin, I slice the skin on the inside of the legs, work the hide down like a too-tight jacket, and saw off the head. The disrobed carcass always gives me a start. There’s nothing graceful about it. There is sinew and meat and bullet-blasted bone. The bloody exit wound kicks me into a mental shift, away from my recollection of this nimble forest creature slinking through the riverbottom. This is food. I trade the big skinning knife for a blade with a piercing tip.

The backstraps are the first cuts to come off. Long and lean, these muscles give a deer its ability to vault fences and twist out of the way of a slashing antler. I start at the hip, with a shallow cut close to the spine, working the blade along the bony processes, then deepen the cut to feel the knife tip bump along the sharp angle in the vertebral arch. When I move the incision out toward the flanks, the backstrap begins to sag away from the carcass under its own weight. At this point my foot starts tapping. This is my favorite cut of venison, and when it comes free of the deer, I hold 2 feet of lean meat draped across my palms. Trimmed of silverskin, this alone balances out the long sweaty drags and frigid mornings in a tree.

I tackle the shoulders next. This is my least favorite part of the undertaking, and I want to work through them before my back aches and my concentration lags. I slice hunks of stew meat from the scapula, filleting the flat bone clean as a dinner plate. One shoulder I leave whole, bound for braising with apples and turnips.

With the hindquarters in sight, I take a break and stretch my back. The next few minutes reap big rewards. I separate one quarter from the pelvis, then fillet out an entire boneless ham. The major seams between the big muscle groups define a foursome of roasts that line up on the table: sirloin tip, top round, bottom round, and eye of round.

Now I’m no longer working with indistinct hunks of meat. I can see individual meals coming to life. I set aside the choicer backstrap for Thanksgiving. I line up steaks I can grill in 10 minutes for a midweek dinner squeezed between soccer games and homework. There’s a big heap of stew meat. I don’t want to wish away a single day of deer season, but already I look forward to long Sunday afternoons in February, fussing over a bubbling black pot. This is what I miss when I turn a deer over to a processor—the chance to relive hunting memories, and relish the memories to come.

I start to run out of steam about now, and I know I could do better when it comes to rib meat, neck rough, and those lower leg cuts I refer to as shin-derloin. I used to scavenge the carcass for stew and grinder meat like a half-starved raven, and I appreciate folks who utilize every edible component. Now I high-grade what I can off the flanks and neck. There’s still enough grinder meat to fill a big pot.

Seal the Deal
By lunchtime, I have enough vacuum-packed venison for at least 35 family-size meals, plus jerky meat. While I didn’t butcher this beast with a knife I forged in a fire, I feel a warm kinship with a few centuries’ worth of my forebears. Now each package bears the date, the cut, and a detail—”big swamp 8″ or “last-day doe”—that will bring back a rush of sweet memory. That’s the last of the 9-pointer I had to drag across the creek. That’s Jack’s first buck.

I close the freezer door. Walking up the steps, I catch myself humming: “Praise God from whom all blessings flow.”