How to Make The Perfect Turkey Yelp with a Box Call

I hold the box call paddle like I’d grasp a newborn’s tiny hand—gently, between the knuckles of my first and... 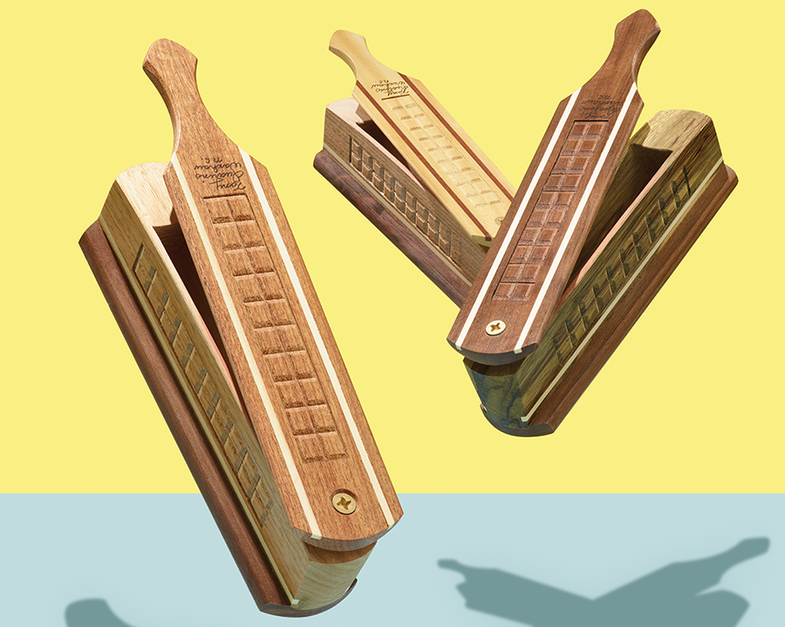 I hold the box call paddle like I’d grasp a newborn’s tiny hand—gently, between the knuckles of my first and second finger. “You don’t have to bear down hard,” Tony Quarino tells me. “There’s plenty of turkey in there. You just have to let it out.”

I give the paddle a full swing, raking the bottom across the rounded edges of the sidewall rails, and there she is:

Those first three notes sound sweet and pure. But then the angle goes wrong, or I’m using too much pressure, because what comes next is more squawk than yelp, a yowling shriek that would send any gobbler scrambling for cover.

I’ve never been even a decent turkey caller, but I aim to change that this spring. And the way I see it, a fine way to learn how to get a turkey call out of a piece of wood is to watch an artist put the turkey call into the wood. Quarino has been making box calls for 13 years, and he’s won a slew of awards. Plastic bins in his North Carolina woodshop are stuffed with ribbons and trophies. He describes call making as “an addiction.” He lives just three hours from my house, and one afternoon before the spring opener, he invited me over to watch him work.

I stick like a late-spring tick to the Jersey transplant for the better part of a morning. Quarino is making a box call with a sound box carved from one solid piece of wood. All of his power tools—circular saw, table saw, band saw, belt sander—are on wheels, and Quarino rolls them in and out of place with practiced grace. He chisels out the sound box checkering by hand. In an hour, he’s turned a plank of butternut into the basic outlines of a turkey call.

We walk over to a drill press with a tilting slide vise, which enables him to vary the angle and depth of the call’s sidewalls. “Now things get serious,” he says through gritted teeth.

The art and alchemy of making a call reside in the geometry of the box’s walls and sound chamber; how the wood grain on top of the rails meets the wood grain on the underside of the paddle; and how friction between them vibrates the call’s checkered sides. As Quarino drills out the inside of the sound box, tiny corkscrews of butternut worm out of the bit, sucked into the maw of a Shop-Vac hose that is zip-tied to the drill press.

“Everything that’s not a turkey,” Quarino says, “take it out.” He fine-tunes the box call’s walls with a straight knife, sands out the box channel, and then lightly rounds the rails. Almost done.

The paddle is affixed with a brass screw and a spring made of piano wire. He tunes the call with sandpaper, rounding the rails just a tad more. “You can make just about every turkey sound with a box call,” he says, running through yelps, clucks, putts, purrs, and cackles, his head canted to the side to catch the subtleties of each note. He nods appreciatively. “They’re all in there.”

Now I have to learn how to get them out.

Test Run
Coaxing a love-starved yelp from a box call requires “just the right amount” of three elements, Quarino says: pressure, speed, and swing. First, don’t stop the paddle stroke short. “Give the paddle a full swing,” he instructs after I chop at the box call like I’m slicing potatoes. “And never lift the paddle off the call.” The most critical aspect of the yelp, he says, is the rollover—when the note breaks in tone between the YEE and the awk. “You get the right rollover when you work the whole call in one motion.”

Frustrated, I give it another try. “That’s better,” Quarino says. “But you’re trying too hard.” He takes the call from my hands, turns it nearly vertical, and with a single finger and gravity, teases out a hen yelp that is dripping with ardor. It reminds me of the time I watched Lefty Kreh cast 60 feet of fly line with just half a rod. A shotgun that swings well, a finely balanced ax—often it’s a matter of getting out of the way and letting a fine tool do its job.

To putt, Quarino demonstrates, you wrap one hand around the call and use that thumb to hold the paddle against the rail, then pop the paddle gently with the fingers of the other hand. To purr, Quarino holds the call horizontal, and uses the heel of his right hand to edge the paddle ever so gently across the side of the box, lifting it sharply at the end. When I point out that I’ve seen other callers purr by holding the paddle between their thumb and forefinger, Quarino nods.

“I know, me too, and that’s what I’m saying,” he explains. “I can’t do it like that, but a box call is such a personal thing. You have to find the ways that work for you.”

On the drive home, the very call Quarino made rides in the passenger seat—a shiny new toy begging for attention. I pull over to the emergency lane twice to play with it. Back at home, I run the call over and over, and it’s a little bit miraculous, really, that a piece of dead tree can produce one of the liveliest sounds in the woods. Still, I can’t help wondering what a slight adjustment might do. It may be heresy to monkey with a custom call, but one thing’s for sure: I don’t know any better. So I turn the paddle screw counterclockwise maybe a quarter turn. That moves the meeting point of paddle and box maybe 1⁄32 inch. Or maybe I’m just imagining that. But it sounds a little different now. A little closer to a turkey, perhaps—like this hen’s in the bar and wouldn’t mind a little company.

I think of Quarino back in his shop, head cocked, listening to call after call, finding the turkey in the wood. I think he’d approve of my tinkering. I give it another series of yelps, and there she is.

Tip of the Month: Dry a Wet Hen

If your call takes a soaking, moisture can raise the grain on the call’s rails and paddle. After the call is thoroughly dry, examine it closely under a bright light to see where grain might have lifted. Take it down using fine 220- or 240-grit sandpaper and apply very light pressure. “You don’t want to alter the shape of the
radius,” Quarino explains, “so just barely smooth out the burrs, and reapply chalk.”