Portage Authority: Fishing the Water You Can’t Paddle To

There was wolf scat on the trail. Knotty ropes of black poop bristled with some kind of mammal fur, but... 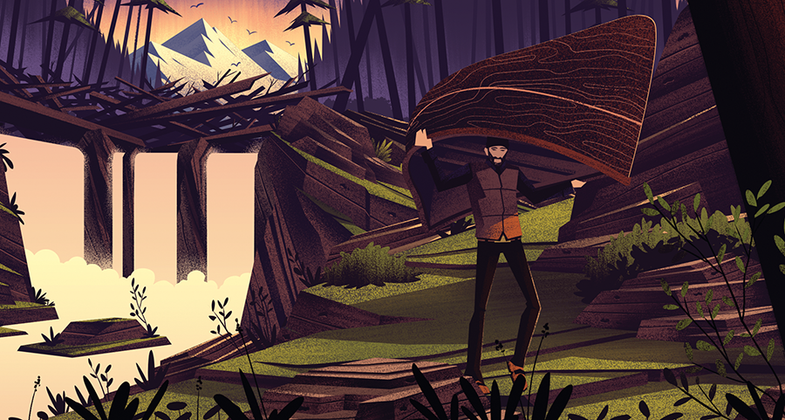 There was wolf scat on the trail. Knotty ropes of black poop bristled with some kind of mammal fur, but I couldn’t bend over for a closer look. I had a 60-pound canoe portage pack on my back and a 30-pound barrel pack lashed to my chest. A half mile behind me, the water had run out in a dead-end channel, so there was no choice but to schlep boat and gear up and over a ridge, toward another blue line on the map. The trail was little more than an animal track that rose from the back of a riverside channel through mossy spruce, hemmed in by bluffs of Canadian Shield granite. When I got lucky, my boots got mired in shin-deep mud. On the unlucky steps, I slipped on hidden veins of granite, raking my calves against the rock. Blackflies feasted on the blood.

I wasn’t the only one suffering. Up ahead on the trail, my buddy Scott Wood grunted through the thick timber with an 80-pound canoe on his shoulders. I caught up with him only because he had stopped to take a break. He’d rammed the bow of the canoe into the stout branches of a spruce, and bent over beneath the boat, hands on his knees. “That was a climb,” he said, paring any unnecessary words. “Didn’t want to lift the boat again.”

I left him in the woods. There was nothing I could do to help. Wood and I were on an eight-day fishing trip through a glacier-scoured landscape, the river morphing from gentle pike stream to wind-frothed walleye lake to plunging whitewater river and back again. All told, we would paddle, portage, line, or drag the boat through and around 31 mostly nameless rapids, but this was the first serious portage—an escape route around Brennan Falls.

We endured boot-sucking muck, roots slick as eel snot, face-slapping tree boughs. The next time we passed on the trail, we greeted one another with little more than a grunt. We got all the gear in two trips. Not bad considering how many fly rods we’d brought along.

Manual Labor
On its face, portaging is simple: To get around an obstacle—a beaver dam, rapids, a 90-foot waterfall—you hoist boat and gear on your shoulders, and hump through the woods until you’re downstream of the blockage. Depending on what you’re portaging around this can take 10 minutes, a day and a half, or a week. It took Lewis and Clark a month to portage 18 miles around the Great Falls of the Missouri. The fur-trapping voyageurs were famous for jogging portage trails with 90-pound packs. More than a few died from strangulated hernias.

I’ve had some hellish portages across Alaska, Ontario, Quebec, and Labrador, but what those brutal days on distant trails taught me has opened up big chunks of easier-to-access backcountry in the little creeks close to home. The fact is, a few downed trees and beaver dams will turn back nine out of 10 paddlers, but if you don’t mind hauling gear over or around these logjams, you can find long, quiet floats where no one has paddled or fished in years. It’s all about efficiency, and the approach applies to big north-woods portages and smaller carries alike. Pack as little as you can, in neat bundles, and minimize all the loose crap that rolls around in the boat and requires a half hour to secure at the portage trail. Have a plan in place: Somebody grabs a load of gear; somebody else hoists the canoe. And don’t wring your hands over how hard portaging will be, because there’s nothing to do but get it done.

Some of the best creek fishing and float hunting of my life required multiple canoe carries and liver-straining dosages of ibuprofen. My buddy Sam Toler and I once landed 175 redbreast sunfish, 15 largemouth bass, a dozen bluegills, three jacks, and a pair of suckers in an afternoon of creek fishing. We had to bulldoze our way over and through a dozen blowdowns, and portage the boat around a half dozen more. We only broke one rod and never saw the footprint of another human.

Northern Highlight
In Ontario, the portage trail Wood and I were taking practically free-fell through the woods on the back side of the ridge. I skidded down on my butt, holding the packs like I would a baby, and Wood roped the boat to the bottom. A thigh-deep quagmire of spike rush greeted us at water’s edge, and we pushed the canoe for 50 yards until the goop contained enough liquid to float it. By then, we were slimed in mud to the waist and bleeding the rest of the way up from the brambles and blowdowns. The bay trembled with the percussion of the un­runnable falls, underscoring the fact that we made the right decision to bail on the river route. As we turned the boat back into the main flow of current, Wood cast a red-and-white deer-hair popper nearly the size of a tangerine. He stripped the fly twice, and we both saw it coming—a push of water and a slash of teeth. We had to beach the boat again so he could land the fish, a northern pike pushing 40 inches, a fish that might never have seen a fly before. It was a welcome payback for the portage’s bloody shins and sore shoulders.

A thousand miles to the south, in my home waters, redeye bass and redbreast sunfish will soon be on the move. Chain pickerel are already spawning. Just last week I refinished the paddles I’ve hauled to northern waters half a dozen times. I’m asking around, poring over the maps of creeks, pointing to thin blue lines. People will say, “You can’t paddle that. Too much stuff blocking the creek.”

Tip of the Month: Stroke of Genius

Whenever either paddler tires and wants to switch sides, he simply announces, “Switch!” then gives it one more stroke, and both paddlers switch sides without missing a beat.