Wicked cold has gripped the West for the past several days. Whitetails are rutting hard across the region, and pictures... 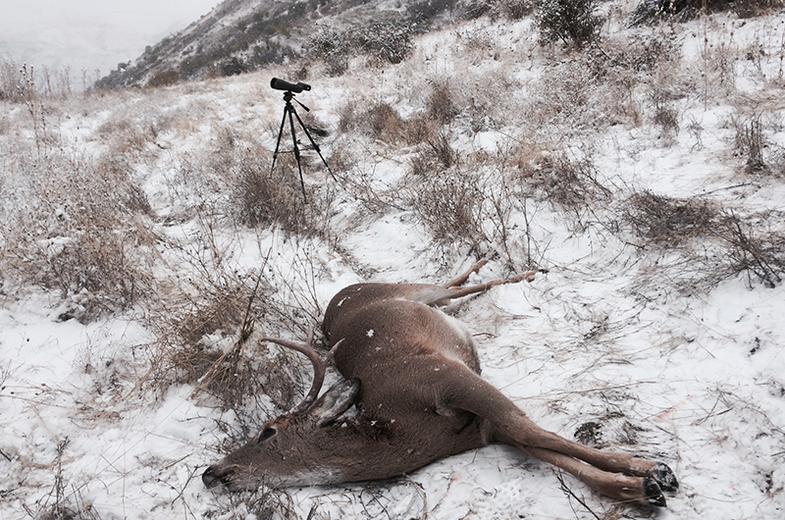 Wicked cold has gripped the West for the past several days. Whitetails are rutting hard across the region, and pictures of big bucks on the ground are everywhere right now. Friends have done very well over the past several days, felling a bunch of mature whitetails in Washington, Idaho, and Montana. My own Idaho buck hunt was the best of my life, although I didn’t connect on the trophy I’d hoped for.

This modest 5×4 slid nearly 40 yards down a steep frozen slope after falling stone dead 330 yards away. This is by far my longest shot on a whitetail – I usually shoot blackpowder – but I was guided by my friends at Killgore Adventures:

Kurt Killgore, his dad, Les, and Heather, his mom. Their open Salmon River properties allow unobstructed viewing of deer and rutting behavior, the likes of which I’d never have imagined. What I saw over the last few days is like the deer equivalent of attending a pornographic film festival. With no exaggeration, here’s what I experienced on my quick trip to Whitebird, Idaho.

On day one of a two-day hunt during an arctic blast and snow squall, Kurt Killgore and I glassed a deep, open canyon and a steep, north-facing slope interspersed with hawthorn, buckbrush, and wild roses. We scanned the canyon and saw deer – everywhere. Killgore spotted several nice bucks, including a very large five or six-point buck almost 1,000 yards way across a broad canyon.

We got into position above the buck and snuck down a very steep slope, but a doe busted us and took off. The buck, along with a small rival, sprung after her and never saw us. I contemplated a long moving shot at the large buck but held up, partly in awe. Kilgore and I both conservatively estimated this was a 150-165-class whitetail. I watched him out to 500 yards in my scope on the other side of the canyon, climbing quickly.

We glassed for hours trying to locate him until a snowstorm sent us to closer-quarters habitat on an adjoining property. During our time trying to relocate that huge buck, we observed eight other branch antlered bucks. We watched two four points spar angrily in close proximity to a doe-fawn group and watched a small five-point shred a bush and make s scrape. Scrapes were evident through our binoculars and spotting scope everywhere around the many clusters of does we glassed.

We later watched two more bucks fight near does at close range, but on property to which we did not have access. We saw several more nice bucks, including a nice mule deer mounting a doe, and made a long stalk on a five-point by walking behind Killgore’s cows for cover. They allowed us to approach to about 25 yards before it launched down a near-vertical hillside with his doe.

On day two I hunted with Kurt’s dad, Les, who’s very skilled at locating deer and getting on them. Off and on for five hours, Les and I watched a heavy four-point locked down with a doe. They were less than 100 yards from being in a legal unit, but his buck was only going where the does was going. Finally another, far larger buck showed up, intimidated the rival without a fight, and immediately mounted the estrous doe, twice.

I filled my Idaho tags for 2014 with small 5×4 and 4×4 bucks, but what’s most memorable is rut behavior I got to watch first hand. The nearly 30 bucks I saw were either seeking, chasing, or locked down with does.

Imagine your favorite and most productive treed deer habitat laid bare of 99 percent of its trees. What if you could see what the trees hide? Open-country whitetail hunting is uniquely western, and the setting in Whitebird is one of the West’s most beautiful.