I’ve heard my share of woeful tales about ATV implements from food plotters, and I expect you have, too. But... 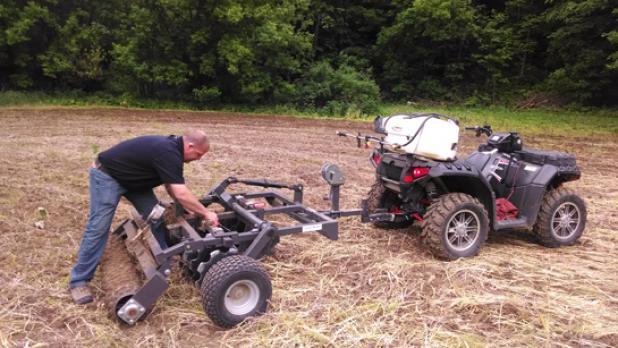 I’ve heard my share of woeful tales about ATV implements from food plotters, and I expect you have, too. But if you’ve let those horror stories prevent you from trying any pull-behind quad attachments, you really should reconsider, for two reasons.

1. ATV flood-plotting tools are simply better than ever — tougher and more capable.

2. One of primary reasons folks wind up disappointed is because they expect too much out of their quad attachments.

Yesterday my neighbor, Alan, and I planted a pair of plots using a disc/culti-packer combo from Tarter. It took us less than 90 minutes to disc, plant, and finish the two plots, which totaled about 1.5 acres. I suspect that yesterday’s less-robust ATV implements would have had a tough time just breaking the soil, but the 711-pound Tarter ripped through it, and the rest of the job.

But here’s the thing: We weren’t asking the disc to perform beyond its capabilities. For starters, these were established plots and the soil was not highly compacted or overgrown with thick grasses. Second, we’d done some important prep work ahead of time.

One week ago, I sprayed each plot (see the sprayer mounted on the ATV in the photo) with Roundup. Though not totally overrun with weed, there was plenty of ragweed and burdock starting, along with volunteer oats from last year’s planting. When we returned yesterday, virtually everything in the plot was either dead or dying. Alan–a highly successful farmer–said this was a critical step, as the ATV disc, which may have had trouble with live plants and roots, was able to chew through the dead ones no problem. Had we not sprayed, breaking ground would have been much more difficult and subsequent weed control (after our plot had germinated) an ongoing battle.

I planted Roundup-ready soybeans with a hand-crank bag spreader that slings over my shoulder. Broadcasting in this manner usually works well in small plots and saves the cost of another implement. Once I’d finished planting, Alan lifted the disc, dropped the culti-packer, and ran over each plot. I’ve used a simple drag in the past, but I was impressed with the performance of the culti-packer, which buried most of the seed for better contact with the soil.

In a couple of weeks, I’ll return with another shot of Roundup to stay ahead of any weeds and, with rain (and a little luck) we should have a pair of great plots–and proof that today’s ATV implements can handle the work, as long as you do some prep work first and don’t expect them to do the job of a tractor.