_by David Draper _ Pan Fried Catfish and Potatoes vs. Maple Syrup Lake Trout I was hoping for an all... 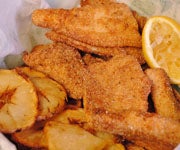 I was hoping for an all fish Food Fight this week, but no one informed the guest of honor. I’ve been out fishing three times in the last week with nothing to show for my efforts–despite emptying several tanks of gas in the process, not to mention using up plenty of cutbait. Because the fish weren’t cooperating, I had to dig deep into my archives for a fish pic. Luckily, Wild Chef reader Will Fulmer (a.k.a. nuclear_fisher) helped me out with a suitable opponent for my tasty, albeit tired, fried catfish photo.

Most people have a tried-and-true recipe for frying fish, but I’m not a good enough angler to get into a steady routine. Every time I fry up some fish, I do something different. Sometimes it’s a batter, other times a standard double-dip dredge. Heck, I’m not even above using a good boxed mixed from time to time. For this batch, I rolled the fillets in equal parts flour and corn meal and shallow fried them in hot canola oil, following it up with some sliced potatoes.

We heard the coho bite was on at the south end of Lake Michigan, so me and four buds chartered a boat hoping to put some salmon in the freezer. In addition to the salmon, we got some large lake trout and I cooked up my portion of those fillets that night. It might have been something to do with us fishing in sight of East Chicago’s massive steel mill the entire time, but I wanted to use a marinade in case of any off-taste. I usually use an equal mixture of oil, soy, and brown sugar, but I was out of sugar so I substituted real maple syrup with a touch of basil and garlic powder. I rubbed the fillets in lemon pepper, marinated for about two hours, and baked at 375 degrees.

We’ve got some pretty good venison photos to feature here at Food Fight Friday in the coming week, but since turkey seasons are under way, I am hoping readers will submit some fresh turkey dishes. If you’ve got a photo you think can win, send it in to fswildchef@gmail.com.
**_
VOTE HERE!_ **