How to Smoke Wild Boar Ribs

Although my Broncos-loving friends weren’t so happy with how the Super Bowl turned out, they all agreed that our spread... 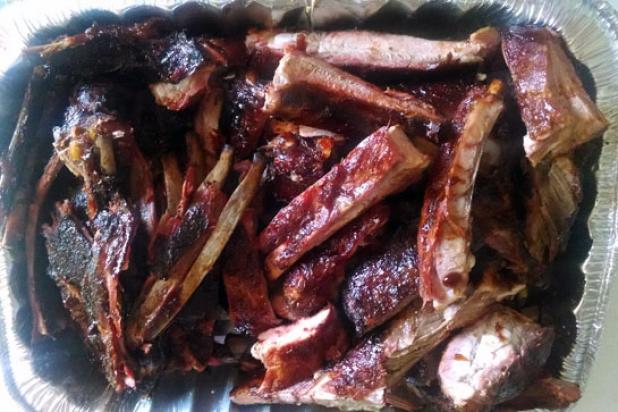 Although my Broncos-loving friends weren’t so happy with how the Super Bowl turned out, they all agreed that our spread of food last night was world-championship worthy. All of the classics were represented, including wings and meatballs and a few varieties of cheese dip. A big pot of taco soup was a hit, as were my girlfriend’s chocolate sugar puff cookies. My contribution was this overflowing pan of pork, featuring ribs from both wild and domestic pigs. I didn’t figure the two slabs of skinny wild ribs (shown on the left in the picture) would be enough for this crowd, so I included a fatty slab of St. Louis style pork ribs, also hedging my bet a bit in case the wild ribs weren’t up to par. Somewhat surprisingly, between the two, the wild pig was by far the winner in the taste test.

I generally use the 3-2-1 method when I make pork ribs. Start by covering the ribs with a rub blend. This particular batch got a healthy dose of Cabela’s Mountain Man Bourbon Rub before going in the smoker at 225 degrees. I like a fairly heavy smoke, so I stoked the fire every hour or so with oak chips that started their life as staves of a Jack Daniel’s whiskey barrels.

After three hours, mop the ribs with apple cider vinegar and wrap them in a double layer of tinfoil. Make sure there is plenty of liquid in the foil packets, which need to then be sealed tightly to allow the ribs to steam for two hours in the smoker, still at 225 degrees. This is especially important with wild pork ribs which don’t have a lot of fat. You really need that moisture to keep the ribs from drying out and to help break down the connective tissue.

At the five-hour mark (three hours of smoking and two steaming), the ribs come of the foil and get a good coating of barbecue sauce. There are a lot of great sauce recipes out there, but I took the easy route with a couple bottles of my favorite, Sweet Baby Rays. (It didn’t hurt the sauce was on sale during Super Bowl week at my local grocery store for 99 cents a bottle.) After saucing, the ribs go back in the smoker for a final hour to give them a nice glaze.

Throughout the entire 3-2-1 process, I kept the wild pork ribs on the bottom rack, thinking they’d catch some of the fat dripping off the domestic ribs above them. While this likely did help the ribs retain some moisture the real, and admittedly accidental, benefit of being that much closer to the fire was the creation of a crisp and incredibly flavorful bark that put the wild pig ribs over the top.