5 Ways to Use Venison Minute Steaks

The other day I pulled this package of meat from our freezer–a steak that had been given to us by... 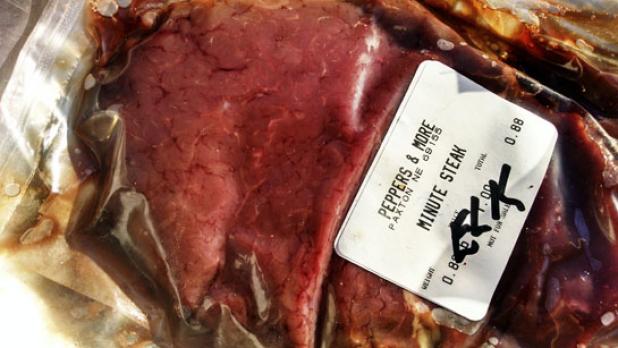 The other day I pulled this package of meat from our freezer–a steak that had been given to us by my girlfriend T. Rebel’s dad from the cow elk he shot last fall. The label instantly transported me back more than 30 years. I hadn’t heard the phrase “minute steak” since my childhood, when it meant a round steak smothered in canned tomatoes, onions, and green peppers served over rice, best known in the Draper household as Swiss steak. I don’t know why the Swiss get blamed for this classic concoction of busy mothers everywhere, but I’m betting it’s a dish familiar to any American who grew up anytime between 1950 and 1990.

Minute steak might be better known as a round steak, though it can also be cut from the top sirloin roast. In many circles, it’s also synonymous with cube steak, or a cut of round steak that’s been mechanically or manually tenderized (so named for the cube-shaped indentations many tenderizers make). In beef form it became popular because: A) It was cheap, and B) The tenderizing process meant it could be cooked quickly without becoming too tough.

This particular package is now thawed in the fridge and ready to hit the pan tonight. I haven’t yet decided what the final dish will be, but, as with venison round steak, there are a ton of options. Here are five that have made my short list. If your venison steak hasn’t been run through the cuber by your butcher, take a few minutes to pound it with meat tenderizer or the flat side of a heavy butcher’s knife.

1. Michael Symon’s Minute Steak with Fried Egg: You can’t escape Chef Symon on TV, so you might as well embrace his five-minute classic. Besides, he had me at fried egg.

2. Chicken Fried Steak: For the past two nights, T. Rebel and I have debated giving in to our baser desires and making chicken fried steaks, but we’re both trying to cut back on the gravy. Her country gravy is amazing, so the odds of this happening tonight are good.

3. Minute Steak with Herbed Anchovy Butter: I love anchovies, but T. Rebel does not. Still, I think I could get away with this recipe from Food and Wine if I can keep her out of the kitchen while I’m making it. It might be worth a try.

4. Steak Sandwiches: Venison minute steaks are the perfect meat for any type of steak sandwich, though I’d suggest slicing them thin and tossing them with green peppers and onions in the form of a Philly. Of course, you could combine suggestion No. 2 with No. 4 and have Chicken Fried Steak Sandwiches on thick Texas toast. With gravy.

5. Swiss Steak: Why not flashback to 1979? It worked for the Smashing Pumpkins. If it makes you feel better, top it with some shredded mozzarella and call it bruschetta steak or something.