Forgive me if I’m late getting on to the fat-washing bandwagon, but it takes a little while for hip trends... 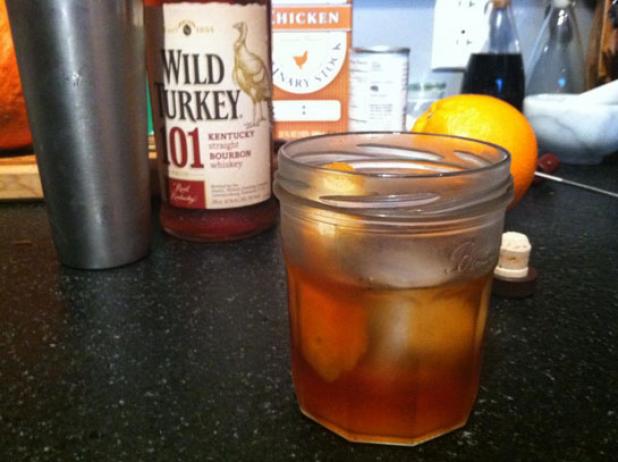 Forgive me if I’m late getting on to the fat-washing bandwagon, but it takes a little while for hip trends like skinny jeans, ironic mustaches, and greasy drinks to reach those of us who choose to live out here in the sticks. Maybe you’re like me and never heard the term “fat-washing” before today, so let me try to explain it to you. The process involves taking perfectly good liquor and mixing it with some type of fat. Rugged folks use things like pork fat and bacon, while more subtle tenders of the bar opt for the oils of olives, nuts, and seeds. The grease-slicked spirit is then placed in the freezer where the fat solidifies so it can be strained of skimmed off the top, leaving behind a spirit infused with another layer of flavor. For a more detailed explanation of the process, check out this recipe for venison-fat infused whiskey over at Foodbeast.

Now, fat-washing a bottle of vodka is something I would support as the nearly flavorless spirit can often use some sort of foil before going in a cocktail. But why in heavens would take a perfect good bottle of whiskey and make it taste like something else? I’d say that’s almost un-American, but that would be ignoring the fact that American whiskey makers are now selling all sorts of flavored spirits because American’s apparently have a growing appetite for such a thing. As an example, see Jack Daniel’s new Tennessee Fire cinnamon whiskey.

All kidding aside, infusing liquor, including whiskey, isn’t such a bad thing after all, or even all that new of a phenomenon despite what hip city types like to make us think. Distillers, both amateur and commercial, have long stuffed bottles of their booze with everything from fruits to herbs to, yes, even oils in order to make it more palatable to the masses or to experiment with something new. Just look at that moonshine with fruit floating in it. Even Deputy Editor Colin Kearns has been on the bourbon-infusing bandwagon for a few years and I’ve been known to smoke the stuff from time to time.

So go ahead, get a bottle of bourbon and wash it with fat. Just do me a favor: Use the cheap stuff and leave the good whiskey alone, would ya?