Unless you butcher your own deer or have a good butcher who will take custom orders, you’re likely to end... 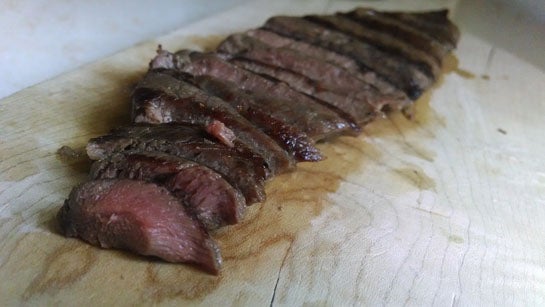 Unless you butcher your own deer or have a good butcher who will take custom orders, you’re likely to end up with some skinny deer steaks in your box of meat when you pick it up. For some reason, a lot of processors prefer to cut venison steaks thinner than an inch. In some cases, especially when dealing with an older buck or bull or a tougher part of the animal, a skinny steak or a thicker one pounded thin is actually preferable if you grill it correctly. Here are five simple tips for grilling a great thin-cut venison steak that has a rich, properly seared exterior and moist, medium to medium-rare interior.

1. Cook it Cold
A lot of resources tell you to rest a steak on the counter for at least 30 minutes and as long as two hours before grilling it. That works with thick steaks that need a long time to cook, but a skinny venison steak that starts at room temperature will go from rare to hockey puck quicker than one that’s cold on the inside. Take your thin-cut steak directly from the fridge (or even a short, 20-minute stint in the freezer) to the grill.

2. A Bit of Butter
Most people know the steakhouse secret to a tasty steak is adding a knob of butter after it comes off the grill. Another tip is to brush on a thin coating of clarified butter (called ghee) before grilling it. The butter will help form that good, crusty sear.

3. On a Hot Grill
Ninety percent of the time I’d advocate setting up a two-level fire in your grill, with a hot and cool side for improved cooking control, but a thin venison steak requires high, intense heat. Think jet burner. Turn your propane grill as hot as it will go, or use double the coals you usually do. If you can lower your grill grate, do so.

4. Lay Off the Lid
For thickly cut deer steaks, closing the grill’s lid will help roast the meat’s interior as the exterior sizzles. This is exactly what you don’t want to happen with a thin steak. Leave the lid off and, just as importantly don’t walk away. Not even for a second.

5. Flip Once
To develop that rich, grilled exterior, you need the meat to sit over the fire as long as possible. In the short amount of time it takes to cook a thinly cut deer or elk steak, you don’t have a very long window. Let the steak sit without moving it. After as little as two minutes, flip it and finish cooking the second side before pulling it off the grill when the internal temperature is no higher than 130 degrees. Expect an overall grilling time of less than five minutes.