Book Review: The Earth Is Weeping 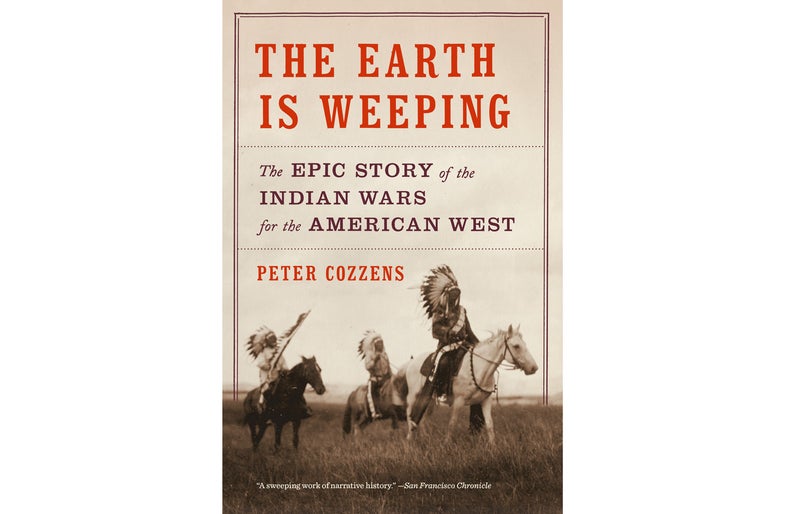 A fine book that chronicles the Indian Wars of the late 1800s. From penguinrandomhouse.com
SHARE

The Earth Is Weeping: The Epic Story of the Indian Wars for the American West, by Peter Cozzens. 544 pps. Illustrated. Paperback. $20. Published by Vintage Books.

This is probably the least uplifting book I’ve ever reviewed here, but it’s also a very fine book. The Earth is Weeping begins with the Sioux Uprising in Minnesota in 1862, which ended with the largest mass hanging in American history, and terminates with the massacre at Wounded Knee in 1890 and the subsequent surrender of the last Plains Indians a year later. At Wounded Knee, the carnage among the Indians who were brought to the Pine Ridge Reservation for help was so frightful that the post surgeon, who worked for the Army and was no stranger to horror, nearly fainted. He had never seen women and children shot to pieces by modern artillery. When he was done, one old Indian woman asked him with no hint of irony when the Army intended to kill them.

This series of wars took place over three decades, through half a dozen presidencies beginning with Lincoln, numerous Congresses, several Union Army and U.S. Army commanders, and federal agencies too copious to count. They presided over a blood-soaked debacle because they failed at every level. Canada, which also had native peoples and a western expansion, never had Indian Wars.

It’s been fashionable for decades to declare the Indian Wars an act of genocide. They weren’t. They were fomented by young warriors whom their chiefs could not control, and by settlers to whom all Indians looked alike and who were perfectly willing to shoot at anything that might have seemed hostile. Included among the guilty are idiot junior officers, like Fetterman, idiot senior officers, like Custer, and uniformed psychopaths, like Chivington.

You can include generals such as Sherman, and Sheridan, and Howard, and Terry, and Miles, who all knew, and admitted, that if they were red instead of white they would do exactly what their opponents were doing. But they all prosecuted their fight relentlessly, because their government gave them no choice.

If there is a gap in the book, it lies with Mr. Cozzens’ neglect of the soldiers who were badly fed, underpaid, not paid at all, issued inferior weapons, poorly clothed, and very often, led by incompetents. Most of the wretched little forts at which they were stationed were places out of hell.

But again and again, year after year, they marched and fought in blizzards and cold below zero, and in mud, and in heat so fierce they drank their own blood and ate their horses. Many deserted, but most did not. Some fought badly, as many of Custer’s men probably did at Little Big Horn, but most fought bravely, always saving the last bullet for themselves.

The best of these regiments were very likely the black regiments, the “buffalo soldiers.” But they were treated with contempt at worst, and condescension at best, by white units—unless fighting had commenced and help was needed. Then they were made welcome. The Indians, who gave the black troopers their collective name, and were in a better position to know than anyone else, rated them very highly.

What caused these soldiers, black and white alike, to keep the faith? Perhaps someone will write a book on that some day. The answer is not here. But a great many answers are.

Seldom, as a nation, have so many of us acted so badly. Here is that story, sparing nothing.