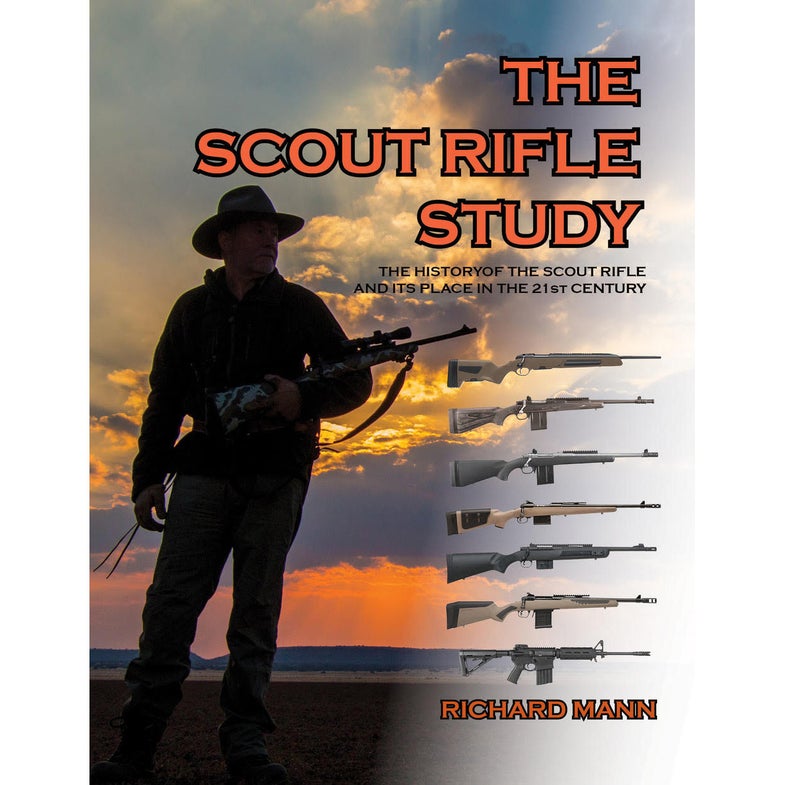 Last fall, Richard Mann sent out The Scout Rifle Study via e-mail, but at least in my case, the connection didn’t work and I only got to see part of it. So, if you believe in paper as opposed to cyberspace, now is your chance to see and own the whole thing.

This book—a 224-page examination of the Scout Rifle from concept to field performance—is a work of love, and of obsession, and there is a staggering amount of work and research in it, and you get to benefit.

The Scout Rifle itself is the creation of Jeff Cooper. It is the tool of the military man who is skilled in land navigation, observation, stealth, headlong flight, marksmanship, and picking the ground where you wish to make a fight of it. Or the hunter who walks a lot and wants one rifle that can do anything.

In his private papers, Cooper codified the Scout:

There are other items on this list, but these are the essentials.

The rifle is a bolt-action carbine in .308, 7mm/08, or .243 with auxiliary iron sights, an IER scope, a good trigger, a shooting sling, and a modest amount of weight. Those, I believe, are the basics. There’s all sorts of bickering about what Cooper intended, and whether lever-actions should be included, and the range of calibers included, and whether the muzzle be decorated with a flash hider, or a muzzle brake, or a can, and so forth.

The Scout Rifle Study covers all of it, and much more. While this is a painstakingly thorough book, it’s not a tome. You can start reading anywhere and enjoy yourself. There are 20 chapters, staring with Cooper’s Scout Rifle concept, then examining each component of the rifle, thorough tests of eight different Scouts, and the results of a Scout Rifle Safari. Richard did his homework. He did yours, too.

It’s ironic that Cooper, who worked with and wrote mostly about handguns, may well be remembered for a rifle that he thought up. But that rifle is a doozer. I’m an unabashed Scout Believer. My only regret about them is that Steyr, which makes the best Scout around, doesn’t make it left-handed.

We may see another book on the Scout at some point in the future, but it’s not going to be half as good as this one.

224 pps. Lavishly illustrated with more than 170 color images and all sorts of other stuff. Softcover. Available on Amazon. Or you can visit Scout Rifle Study and order an autographed copy for $50.