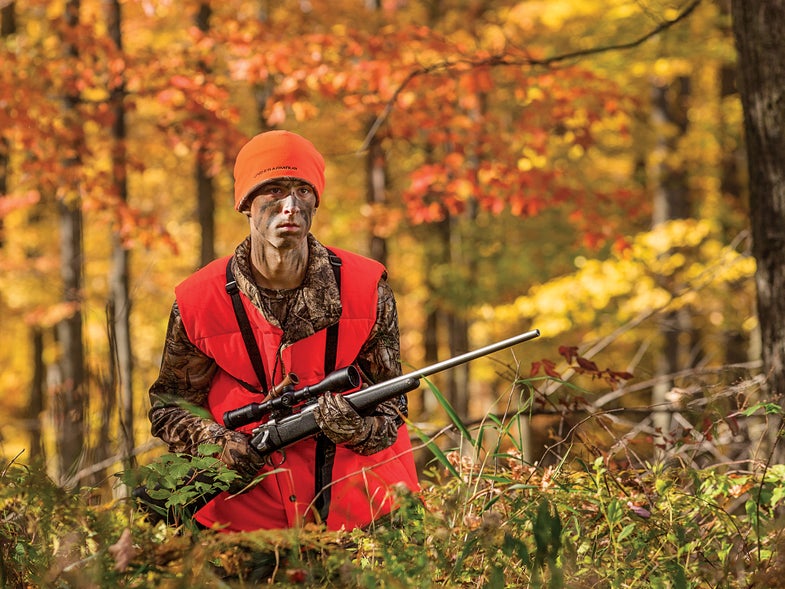 Wait Time: Pause when conditions call for it, not because it's time to.. Lance Krueger
SHARE

At times it pays for you to ignore the commonly held wisdoms of still-­hunting technique, because religiously following them can cost you a shot at a buck. Consider breaking the following rules.

Yes, compact 7X or 8X binoculars are vital for picking through clusters of brush that may hold a hidden buck. They’re also useful for scanning ahead to plan your route or assessing a distant deer’s age and antler quality. But mostly, tap your God-given vision to find a buck. Use your wide-ranging eyes to take in the whole scene around you—looking for sign, scanning for deer, analyzing the habitat, planning your course. Save the optics for specific tasks.

The slower you still-hunt, the better, right? Problem is, all habitat isn’t created equal. Walk at a moderate to fast clip through low-odds areas to cover more ground. Throttle back when you ease up to potential doe bedding areas, transition corridors, funnels, feed areas, fresh rubs, and scrapes. Then sneak turtlelike through those areas until you see your buck—or convince yourself he’s not there.

It’s good to have a general idea of a route you’ll take on a still-hunt, but don’t micro-plan every step. Be flexible. If you see a line of fresh rubs and scrapes heading into uncharted territory, follow them. If the wind shifts and blows poorly for your intended route, make an adjustment. Study your topo or GPS and work a different area.

Sure, you can pick apart cover and see deer more easily when you’re stationary. And deer are less likely to spot an immobile lump (yeah, that’s you). But some hunters stop almost on a robotic basis—every two minutes, every 10th step. Pause more parsimoniously. Freeze, of course, when you spot a deer. Also stop when a dense piece of cover demands picking apart with optics, or a field edge or travel corridor looks ripe for a sit of 10 or 20 minutes or more. But don’t just pause because you’re supposed to. You won’t cover enough ground.

We’re told dense, nasty thickets are where old bucks hang out. In September and December, that’s true. But when the rut is in, look to doe territory. Find gentler, semiopen habitat with brushy fields, scattered cedars, honeysuckle, and tall grasses closer to major food sources. Mature bucks will be shadowing these areas, hanging downwind looking for their next estrous doe. Also hunt the routes bucks take as they move between different female groups. None of these areas are in the thick ratholes where the bucks were in summer and will be in winter.

Still-hunting requires that you slither through the woods as silently as a snake, but you should break that rule for one exception: calling. Grunting and doe bleating periodically while you pause in prime areas can bring deer that were just out of sight into range. Without calling, you’d likely walk right past them without getting a shot.

7. Raise your bow or gun slowly!

Inch up your gun or bow, then squeeze the trigger or release the arrow…at times it works. But often this slow mounting just gives a buck more time to make his escape. If you think a deer that’s looking at you can’t see you move slowly, you’re kidding yourself. And if he’s not looking at you, a quick and smooth mount (but not a fast jerk) is best.

So we say above to get on with it. But first, make sure it’s the right move. I was pumped on a recent still-hunt when I squeezed my ’06 and a 3-year-old 8-pointer dropped cleanly. Then I saw the bigger 10-pointer standing broadside 40 feet behind him, staring at me as if he knew the limit was one buck.

If you see a nice buck in range, take him quickly if he’s alert and ready to bolt. But if you’re undetected, scan the area around him and make sure you don’t make the mistake I did. There could be a bigger one standing nearby that just whipped the butt of the buck you’re looking at.