Every once in a while, something comes along to debunk your strongly held opinions. For instance, I have believed, and... 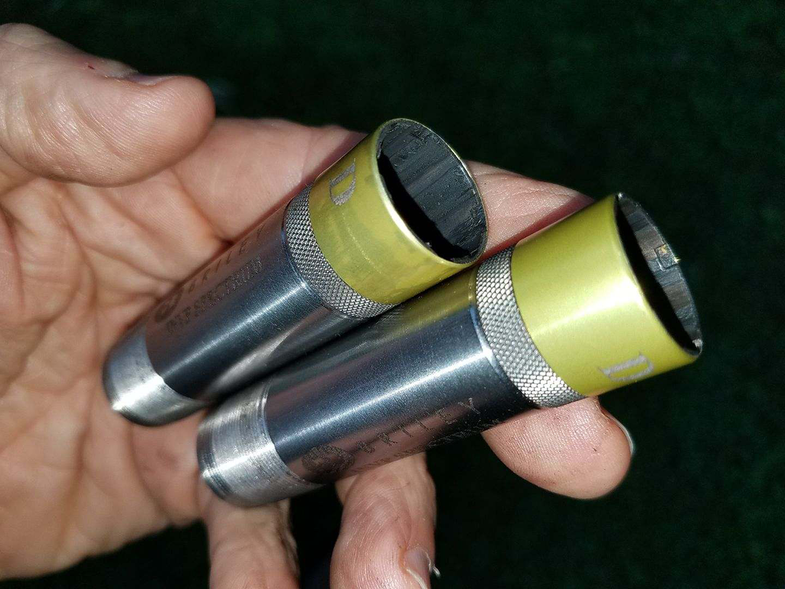 Every once in a while, something comes along to debunk your strongly held opinions. For instance, I have believed, and said as much, that careful choke choosing belongs way down the list of “reasons you hit a target/bird,” behind keeping your head on the gun, your eye on the target, and gun fit and balance. Therefore, my attitude toward chokes has always been pretty relaxed.

Then I happened to interview sporting clays shooter Johnny Meitzen about changing chokes and he said “Everything close I shoot with Briley Diffusion chokes.” He raved about them, then asked “What kind of gun do you shoot? I’ll have them send you some.” I figured he was just taking care of one of his sponsors, but I thought they’d be worth a try, so I said, “Citori with Invector Plus, and thank you very much.”

A few days later a box from Briley showed up. The Diffusion chokes are gently rifled, the idea being to spin the wad and disperse shot more quickly, giving you a quick-opening pattern for close range targets. It’s similar to the Paradox guns of the British Empire, which were rifled at the muzzle so they could shoot either a bullet or shot. Fabarm used to make an O/U with fixed rifled chokes specifically for European woodcock hunters and, for the extremely well-heeled, Holland & Holland makes a few paradox guns today. Incidentally, Briley also made (or maybe still makes) straight-rifled turkey chokes that were supposed to stabilize the wad for tighter patterns. Whether they stabilized wads or not I don’t know, but they sure worked well. But I digress.

Rather than patterning the new chokes first, I took them straight to the skeet field. Targets broke solidly, and I couldn’t miss. When I switched to regular chokes, I could miss again. When the Diffusions went back in the gun, my scores went up again. It’s been that way all summer. As Mars Blackmon insisted in those ancient Air Jordan ads: “It’s gotta be the shoes.”

Having shot these chokes so well, I am now reluctant to pattern them, because why ask why? What if it shoots a patchy pattern that wrecks my confidence? I will, at some point put these on paper. I will definitely pattern them before I ever take them into the field, because gamebirds deserve no less. They might be just the thing for close cover bird hunting. In the meantime, I’m going to keep breaking targets with them, at the same time as I shatter my own long-held opinions. They sell for $84.95 apiece in 12 gauge only.