The company’s new top-of-the-line model is virtually flawless—and a bargain, to boot 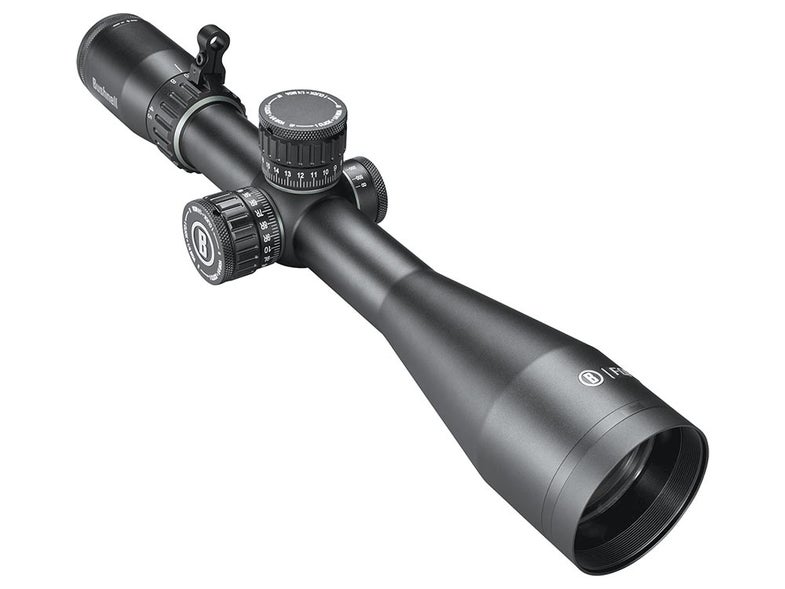 At the 2018 SHOT Show, a number of us gun-writing wretches were invited to the Bushnell booth where we were sworn to secrecy under writs of habeus corpus, mandamus, attainder, replevin, and sh*tlist, lest we disclose before a specified date what we were about to be shown. Then we were introduced to three entirely new optical lines. They are Prime (entry level), Nitro (high mid-level), and Forge (top of the world, Ma*).

I was intrigued by the Forge line, because it’s (a) a very odd name for a line of riflescopes; (b) the most expensive, and it’s my goal to spend as much of your money as possible; and (c) obviously designed by people who know how a riflescope is used. This last is not a given in the wonderful world of optics.

There are three riflescope models: a 2.5-5X, a 3-18X, and a 4.5-27X. All have 50mm objectives, and all are mechanically identical. They are loaded with features, so I’ll touch on the high points here, and let you do your own research for the details.

The scope I tried out was the 4.5-27X. I intended to use it at mid-range (300, 500, and 600 yards), so I wanted gobs of power, since the smaller you aim, the closer you miss. Although this is a powerful scope, it’s neither heavy (30 ounces) nor overly long (14 inches) nor bulky. Bushnell has opted for a 50mm objective, which saves weight and allows you to mount the scope reasonably low. You can put this on a hunting rifle or a tactical rifle and not need a caddy to lug it around.

A power-selector-ring lever is standard. It’s shaped correctly and is large enough to give you some actual leverage. The ring itself turns easily but firmly.

The optics are very good. You won’t mistake the Forge image for the one you get with a Nightforce or a Schmidt & Bender, but on the other hand, the Forge does not cost $2,300 or $3,500. The glass also has Bushnell’s EXO Barrier Protection, which repels water, oil, dust, and debris, and prevents scratches. This is an underappreciated feature, and it’s worth remembering that Bushnell was the first to have such a coating, way back in the 1990s, and that it has saved more than one hunt for me.

It’s in the adjustments that the Forge truly stands out. Whoever designed it was aware that any tactical scope is operated by feel, not sight. You lie there, prone, your eye on the target, and count clicks. If the clicks are too mushy or faint to count, or if you go skidding through two or three at a time, you’re screwed. And if they don’t move the crosshairs accurately, you’re also screwed.

I mounted the Forge on my very horrible-looking but very accurate Savage Model 10 BA Stealth (in, what else, 6.5 Creedmoor) and discovered in short order that not only do the adjustments move the point of impact exactly where it should go, but that the Forge adjustments are the only ones I’ve used that are as good as those on Nightforce scopes, which are the best on the market. They are firm, sharp, and distinct, with plenty of space between clicks. There is absolutely no doubt about what you’re doing.

Bushnell has taken a very useful additional step. Adjustment turrets of the tactical variety, without caps on them, are prone to accidental movement. Not the Forge scopes. The turret caps snap up and down, and when they’re down they’re locked. Pull the cap up and it adjusts. Push it down and nothing goes anywhere without your permission and a note from the teacher.

(This feature comes in handy in unexpected ways. Today, at a 300-yard fun shoot, my first-ever using the astonishing Shot Marker scoring system, which is something from the flight deck of the Starship Enterprise, I failed to hit the target with my first round. At first, I put it down to Electronic Mischief. Then, in the next nanosecond, I realized that I had set the reticle to shoot at 500 yards. Rather than wetting myself, or rushing off, shrieking “I can’t go on,” I remembered that my Nightforce scope has the same return-to-zero feature as the Forge, so I grabbed the elevation knob, hauled it clockwise as far as it would go, and there I was, right back at my 300-yard zero.

(Just after this, I realized there was a woodchuck browsing beneath my target frame, completely oblivious to all the lead flying his way. I’ve never seen a smart-looking woodchuck, but this one was particularly dopey-looking.)

The Forge comes with a choice of four reticles, in either the first or second focal plane. In the first focal plane, the reticle gets smaller or bigger as you shift power up or down. In the second, it stays constant. There’s no reason for a first-focal-plane scope unless you want to use the reticle for ranging, but since the laser rangefinder has already been invented, why go to the trouble?

Of the four reticles, I much prefer the one called the Deploy MOA. It consists of horizontal and vertical stadia wires that are fine enough for precise aiming, and heavy enough to pick up without bursting the blood vessels in your eye. It’s minute-of-angle, not mils, and it contains no hieroglyphs, runic letters, Dow-Jones abbreviations, periodic tables, or anything else.

About price. The list is just over $1,000. I think you could charge $1,500 for it. The Forge is that good. In the real world, it’s going for $850 to $950. That makes it a bargain. This is a very carefully thought-out instrument with a whole slew of useful features and no weak points. Its adjustments alone set it apart.

*Where did this come from? And stay the hell off Google.