How to Land Trophy Catfish From a Kayak 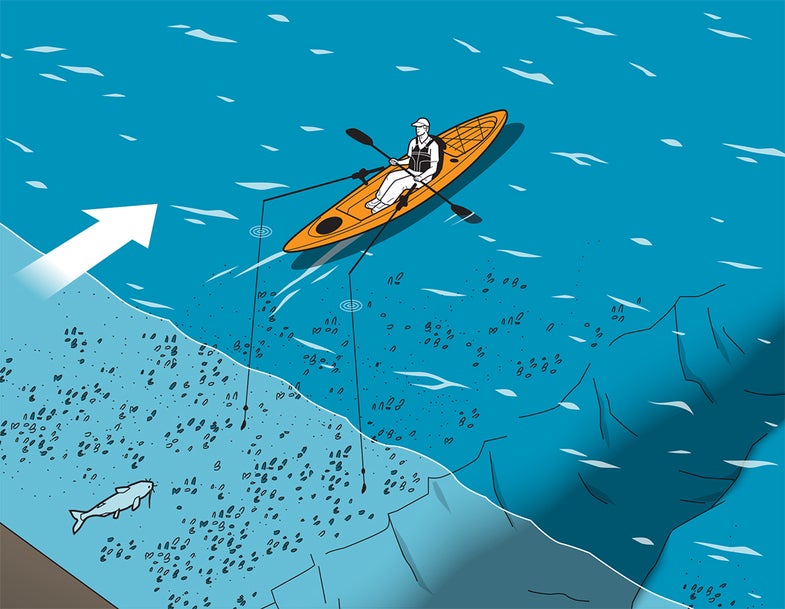 My fishing buddy Matt Seymore is  addicted to catching trophy blue  catfish from his kayak. Last summer, his biggest fish came from Lake Guntersville, in Alabama, and weighed 40 pounds, but he caught dozens of them in the 10- to 30-pound range. Here’s how he does it.

Seymore uses a 7- to 7½-foot medium-heavy outfit with 50-pound braid. He uses a standard catfish rig: a 3⁄4- to 1-ounce egg sinker, bead, swivel, heavy mono leader, and 8/0 circle hook. Besides some extra tackle, cut skipjack for bait, and a stringer, Seymore carries a contour map of the lake. He doesn’t have a depthfinder, so he needs to constantly check the map.

Before he goes fishing, Seymore checks current-generation predictions because he’s learned which water-release rates work best. Then he focuses on likely areas with his map, such as elevated offshore flats and creek channels that drop off into the main lake. He usually fishes around 18 to 25 feet deep. Seymore catches most of his blues over mussel-shell bottoms.

Most of the time Seymore drift-fishes with two rods. “I cast the rigs just ahead of me, let them sink to the bottom, and then reel in two turns of line. Then, I keep the nose of the boat into the wind with my paddle and start drifting backward. My rods are held horizontally to the water’s surface. If I’m not having any luck, it’s usually because I’m drifting too fast.”

Big blues hit hard, but it’s important to be patient and let the circle hook do its job. These fish may weigh two-thirds or more of what the boat weighs, so they’ll pull you around once hooked. “One thing I’ve learned is to back my drag off when I get them near the surface,” he says. “The big ones surge when they see the boat, and they can flip a kayak in a hurry.”